I just wanted to take a minute and share the great bull I killed on public land, DIY on the General Muzz hunt in Utah.
It started with a long drive with MM'r Travishunter3006. Opening morning found us hunting the thick bedding areas in the pines. Lots of sign but we were not seeing much. around 11 a.m. we decided to take a break and hit a few cow calls. Being November I didn't think much of it but all of a sudden cows start calling and a bull bugles. after a few minutes of trying to work this bull, three other bulls start bugling. we tried closing in on them but they soon calmed down for the afternoon.
Later that evening the bulls started talking again and as we were closing in on a hot bull, this bull caught my eye making his way through the aspen. trying to catch up to him, I came around a pine tree and see him in the far clearing. Having seconds to decide I throw everything down and set up for the shot. I quickly range him and let it fly. Not expecting to hit him at 429 yards with a muzzleloader, To my surprise he dropped in his track. It was a great feeling knowing I put meat in the freezer.
The next day was spent chasing a monster bull but Travis just never could get a bullet in him. After the 3 mile pack out we were met by a good friend named Bobcatbess. we sat around the campfire drinking 6 packs of bee uh... Mtn. Dew

I'm not great at scoring elk but we ruff scored him at 320 2/8s. I know the pictures are not the greatest, and he looks small, bad camera angle. He looks a lot bigger in person.
It was a great hunt and can't wait to do it again next year. 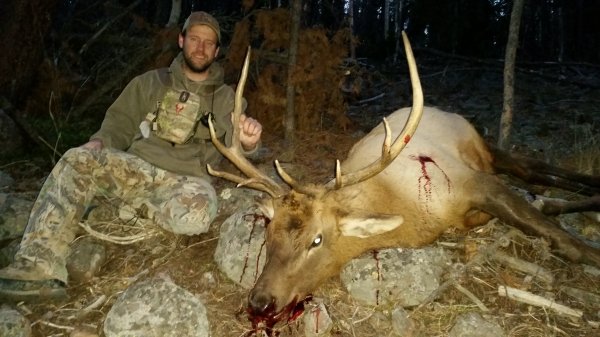 That thing is way bigger than 320.

LAST EDITED ON Dec-14-14 AT 08:38PM (MST)[p]I would agree with smitty. The mass on the antlers are incredible and the tine length doesn't get much better. Huge whale tales. Looks like a bull shot out of a premium Nevada or AZ unit. Are you sure you didn't poach it down there and haul it north? With you sitting in the foreground of the picture it really does take away the true size of the massive bull. Huge congrats on a bull of a lifetime.
E

I Thought We'd had the Talk of not making the 320" Bull Famous on the Forums?

Keeping the 400+ Yard Shot with the SMOKEPOLE Quiet was gonna be a tough thing to do!

I Told you He Scores way better than He looks!

You Guys shoulda seen the Damage boots 400+ Yard Shot done to this Bull!

JUDAS did He ever put the SMACKDOWN on Him!

Are you kidding me?
That thing will easily go over 350"!!!!
I'll bet that if you let ME score him and use MY tape I could get even more.

We all know it's all about the inches and really has nothing to do with the hunt or the wilderness experience!
TIC.

I know we talked about keeping this bull quiet but I had to show it off. That and not many can make a 400+ smokepole kill.

Those who question the score need to realize this picture doesn't do the bull justice. I had my good friend JB, AKA Zigger (I think that's his mm name since being banned) score this bull. He is an OM for B&C so I take his word. He did drink a fifth of vodka before scoring so maybe deduct 2-3 inches.

Thanks for the kind comments.
D

Congrats on a great Utah general bull. I love the muzzy elk hunt here in Utah. One of my favorite hunts.

Pics can be deceiving!

The thing that throws em all off boot is:

You're sittin way up front for the Pic!

Instead of sittin 15 Yards behind the Animal like the Big Shots do!

When I told wet_boot the Bull was Right at 320" He didn't believe me either!

But after He shot it,then as He Hiked 400+ Yards,The Bull got Bigger & Bigger,No Ground Shrinkage here!

Tell them about the 450"+ Bull boot that got away!

My bull looked pretty small looking through that 1? scope. Boy did he grow as I walked up on him.
The one that got away was easily twice as big as mine. He's probably the only breeder bull left. SORRY.
Deerlove is right on. 61 3/8s. The mass Makes them look small
R

3 miles what you couldn't call him to the truck from the drivers seat? Great Bull none the less.

I did call it in. Dryboot is just afraid to tell the whole story.

> 3 miles
>what you couldn't call him
>to the truck from the
>drivers seat? Great Bull
>none the less.
>
>Rutnbuck

I'm gunna have to get me one of them Spotlights 400 yds at night wow.
Rutnbuck
I

Did you notice this bulls right G1 cures down giving him extra inches. Not sure if the scorer accounted for the extra length. Congrats on a great bull, and that must have been a great shot! I know even the monster bulls can look small with a 1 power at over 400 yards. You must practice a lot. Congrats.
S

Is that a trail camera you are wearing around your neck? Odd way to take pictures. But then again it is a bull of a life time.

>Is that a trail camera you
>are wearing around your neck?

I'm sure your observation is accurate. He likes to take lots of "selfies" and the trail cam is a cheap and efficient way to do it.

Zeke, the selfies we send each other shouldn't be discussed in an open forum or I will cut you off.
All kidding aside this bull was shot at close range, 50 yards.
Rut he wasn't killed from the truck as I had to unplug the spot light and chase him. Luckily the battery was charged.

I Swear to GAWD the Barrel was on a 34 Degree Incline when He Pulled the Trigger after doing the Math of the Trajectory!

>Zeke, the selfies we
>send each other shouldn't be
>discussed in an open forum
>or I will cut you
>off.
> All kidding
>aside this bull was shot
>at close range, 50 yards.
>
> Rut he
>wasn't killed from the truck
>as I had to unplug
>the spot light and chase
>him. Luckily the
>battery was charged.
>

Elkassassin, I think you're getting bulls confused. After reviewing the footage, The bull I shot at 400+ yards was a gut shot and never recovered. I shot this bull while tracking blood. I figured after tracking for a good five minutes he would survive.

I damn near forgot about the other 3 Bulls you GUT Shot/Wounded!

Hope they made it!

Dang, that bull was a bleeder.

NO wonder you always have extra $$ in your checking account!

And for the +400 yard shot with a muzzy........you should be a shamed of your self! If your gonna spend money on a gun, see what it can do! best way to hunt them critters at long range is to find a herd of at least 50 elk. Range the herd with your 1,000 yard range finder, when the range finder doesn't give you back a yardage, just hold a little high on the herd and let it fly! You will get a few shots off and possibly have a few blood trails to follow

Started reading and then the comment I could stop laughing.
O

Man some of you guys are ruthless. The milk on his lips comment really was a low blow.

Hell we all know he didn't have any milk on his lips, Because a month before you got his mom with a 621 yard shot.
He is just a poor orphan.

I have found if you go the extra mile it's Never crowded".
>[Font][Font color = "green"]Life member of
>the MM green signature club.[font/]

I seen the 2nd Bull you GUT SHOT Sunday!

He's still kinda hunched up but I think He's gonna make it!

He's got a Festered up Spot on his Side just above his Flank!

I should of waited until the bull was slowed down to a fast trot. Hopefully he'll grow a weird rack as I'd love to shoot a goofy bull this year.
S

Congrats to the hunter. Sounds like fun was had by all.

But why's this in the elk forum? Ain't that one of those mule deer things? 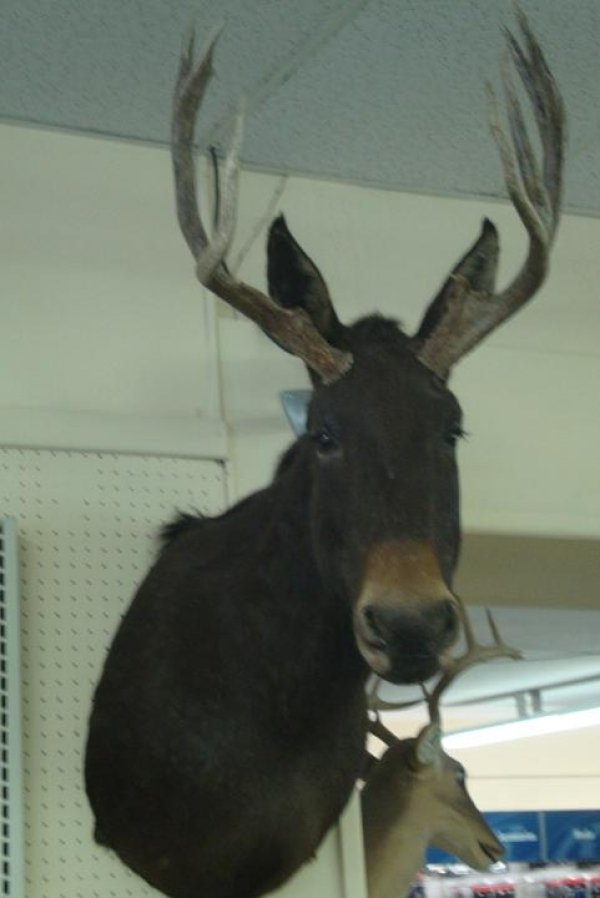 That's a nice one. 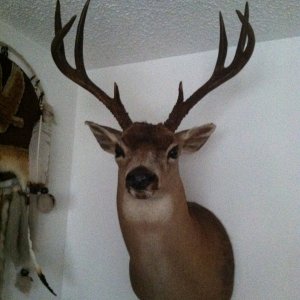 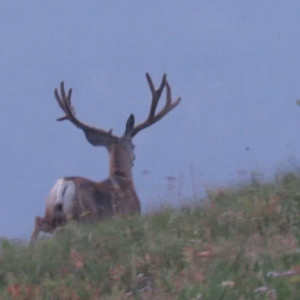 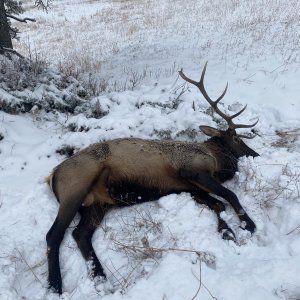 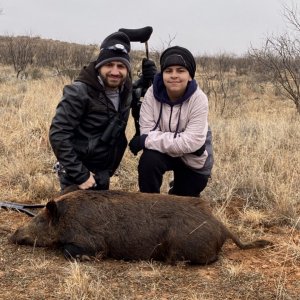 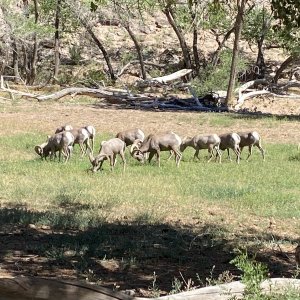 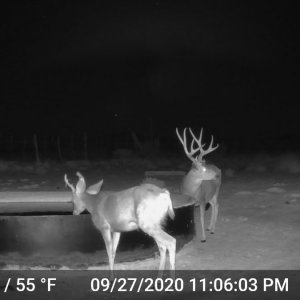 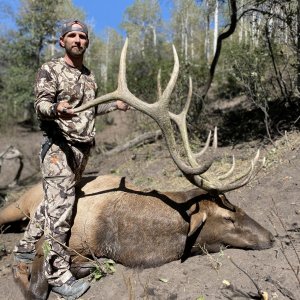 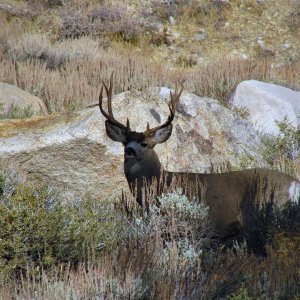 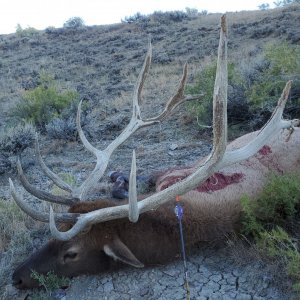 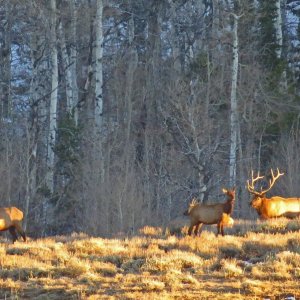 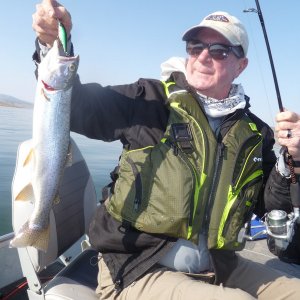