Here is my 2013 Region 3 Whitetail buck. Caught him nose to the ground tracking me. Guess he wanted to go for a ride in my backpack. Not much of a rack, but he had a sizable body on him. Was a good grunt back to the truck with a full pack.

My late moose hunt has been going really slow. I've only seen one moose thus far in my unit, a cow. We've got some good snow but I guess not enough to force them down quite yet.

I did manage to see a couple little bulls in another unit. One was an elusive spike/fork that had managed to sneak through the General Open Season on spike/fork.

I figured this was a neat find. I noticed a moose skull and bones at the bottom of this tight crevasse. Possibly a lion drug it down there but I'm thinking it is more likely the moose fell in there and died.

Some random pics from the last few weeks.

Here I am on the eve on yet another 'last day of the season.' I finished up the very end of the season with very few deer sightings and a ton of moose sign in the very same unit I had a draw for the month of Nov. In Nov. I barely could cut a track. Ain't that the way it always goes? In that particular unit, it takes some good winter weather to really set in before the moose show up. And like a light switched on this weekend, there were moose all over the place. I can't complain though, as the last two years I have had moose success. Hard to think going 3 for 3 was even realistic in low odds draw units. During my Nov bull moose hunt I only saw two cows. Here are pics of the second cow I saw.

Here are a couple bulls a week after my moose season ended.

While the early season muley hunting was super slow, it really picked up in the late season. I've been focused on one particular giant nontypical the last two seasons. I have yet to even see him. I picked up his 2011-2012 sheds and was amazed to think a buck of this caliber grew up right under my nose with no sightings whatsoever. It still blows my mind. Having one piece of the puzzle, I tried to find more pieces only to be left shaking my head every time I searched. Be it trying to find more years of sheds off of him or locating him post season last winter, preseason this summer or during both last year's and this year's hunting seasons. I have covered the ground, pounding the boot leather and have not turned up another hint of him. I knew I would hold my tag for him for at least two seasons as he had to be an older age class buck when he grew the sheds and two more years would be about the most I could hope for.
As the rut came on, I saw some tremendous rutting action and was able to pass on some great up and coming bucks. Here are a few of the bucks I was able to snap pics of.

While I had every intention to hold my tag for the giant nontypical, I ended up seeing another buck that had my head spinning. He is everything you could ask for in a giant typical, a solid 190-195 class clean 4 point. When I glassed him up I was hunting by myself and actually had an argument with myself over the fact I was thinking of passing on him. I had vowed I would hold my tag strictly for the giant nontypical. After several minutes of watching him in the spotter, I told myself I was a fool to pass on such a giant typical and I got my gear together to make a play on him. That particular mountain is extremely thick and once you get on it, you don't see things until you are within 20-30 yards of them. I know it well and knew exactly how to get in on him without being detected. I burped my way in and had does and little bucks all around me. I had to sneak and peek around every deer in hopes I'd have a close encounter with the typical. After combing it back and forth and not seeing him, I knew I had to back out before I spooked all the deer. Once down and back on the other side of the valley where I could glass again, I saw him on the next ridge over from where I just was. He wasn't spooked but was solo and heading for an untouchable spot in some cliffs. I've had many a foiled stalk on this mountain and knew the cliffs are next to impossible to get close, so I just enjoyed his huge frame in the spotter until he was in the conifers and out of sight. A couple days later, he showed up again only to move across the entire mountain at a fast pace with no chance at intercepting him before he disappeared once more. I have looked for him pretty consistently since then and he has disappeared on me. I believe I saw this typical in the winter of 2010-2011. While he was on my target list, I hadn't seen him since then and after finding the big nontypical sheds, I forgot all about this typical. I hope he shows up again this winter and I can actually take some pics of him and hopefully pick up his sheds. Just seeing a giant in the hunting season is enough to keep the fire going for a long time and gives me hope for next season. I will continue to look for both the giant typical and the giant nontypical this winter and during the spring shed season. Who knows, maybe I might strike Brown Gold again? While another season has come to a close, it leaves me with a happy heart that I fought the battle hard and these old bucks kicked my butt once again. Killing a giant on his home turf isn't easy. They are old for a reason. We have been plagued with high populations of wolves over the last 5 or more years. There is no doubt our deer and moose populations are only a shadow of what they used to be only a few short years ago. And yet, these two old bucks are still roaming the hills! There is no whinning from me this season, only respect that these big ol' bruisers have beat me once again. Can't wait until next Sept when the game starts once more.

Here are some pics of the nontypical's sheds. I have nicknamed this buck The Slug, as the sheds had both slugs and snails on them when I picked them up. I had always thought it was tree rats and mice that ate sheds. I guess the little critters eat them too. These sheds are 11x11 and both score 111 and some change, putting this buck in the 245 range on the hoof.

Last week I met an old friend once again. I am so surprised this old bull keeps on showing up year after year. The first time I saw and photographed him was in Nov. of 2007, when he was a 6x6. Now it is 2013. He lives in an area where elk are few and far between, so there is no open season on elk. The amazing part of the story is there is an overly large wolf population where he lives, as well as a few lions that have a liking for the taste of elk. Yet this old boy keeps on roaming the hills. He has been a joy to watch for not only me but several of my co-workers, as well as other locals that know of his whereabouts. Sometimes he acts very tame and lets ya get close for photos, other times he is very elusive and doesn't show himself for the entire winter. Last week I was able to snap a few lowlight pics of him. I hope I can get some better pics of him in good light later on this winter.

There are some good pics of him in Part 1 of my HAC but I will post them again to see his growth as he aged.

Here are some pics from this past weekend. 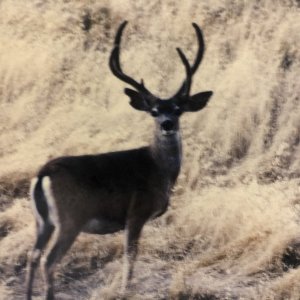 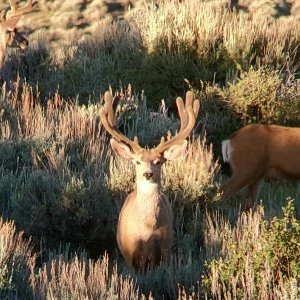 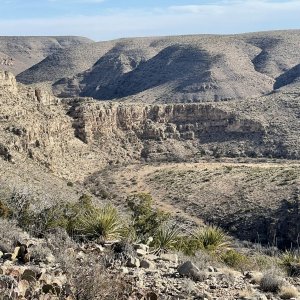 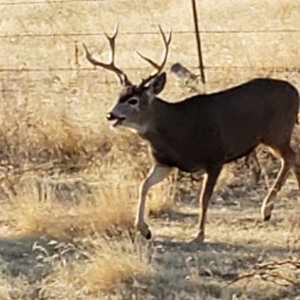 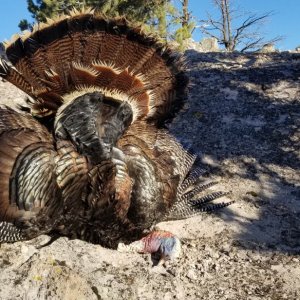 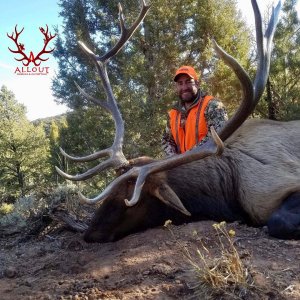 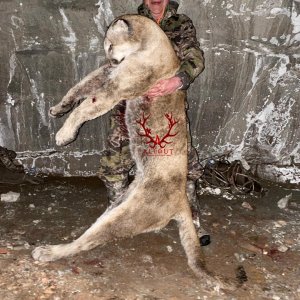 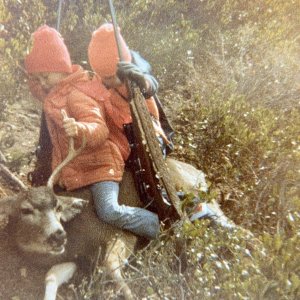 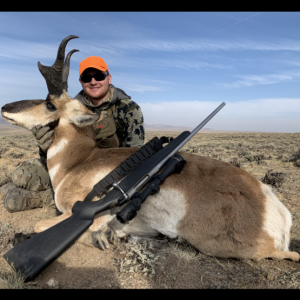 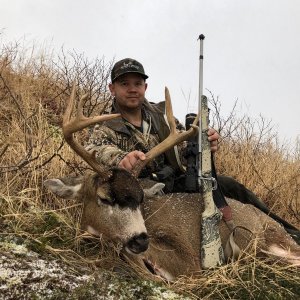 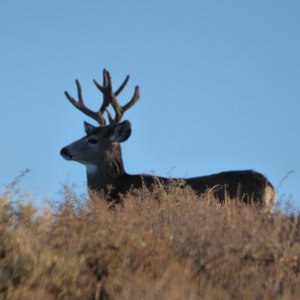 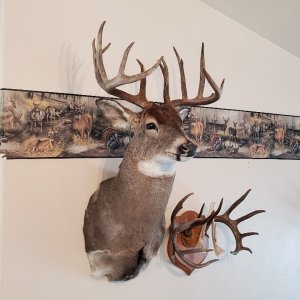