Been a very tough but successful Season in B zone. my main goal was to get my daughter a buck and that worked out perfect with her getting two as you may have seen in my previous post . After a few tough weekends and my last day I could hunt B I found this tag worthy buck and was able to get it done. Not sure what the deal is but sure seems like there are less and less mature deer in B and deer in general every year. Good luck to everyone still out there for this coming weekend. 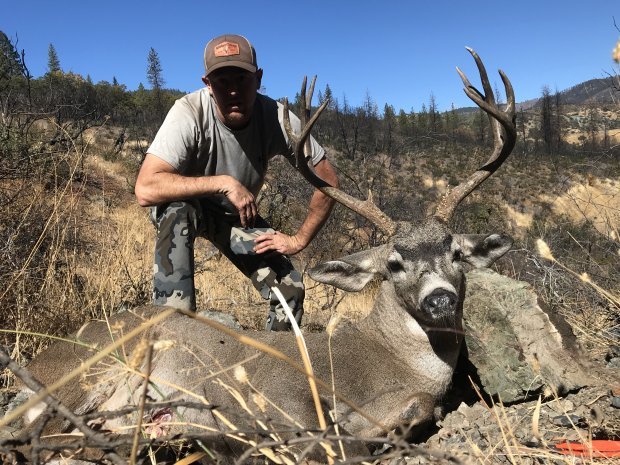 I have some posts in this section of the site

When I hunted Trinity County I could just go buy 2 B tags and go hunting
Back then the hunting pressure was less than now and most of the property was cattle ranches or sheep ranches not dope grows like now.

I'm sure a lot of deer get poached too, not much law enforcement either

Great buck Jason! Congrats and you're right about less and less mature bucks every year it's been tough for us this year too hopefully we can find a few good ones like that in these last few days. Love seeing your posts u guys always get it done

LAST EDITED ON Oct-23-19 AT 01:36PM (MST)[p]Congrats on the buck. And congrats to your daughter.
The problem is allowing 2 tags. Cant keep hammering the herd and not expect a decline.

Another huge impact on mature deer IMO is the technology that allows for 700+ yard shots. 20 years ago many deer were seen that couldn't be shot from distance and a hunter had to get closer to seal the deal. Hard to do on mature bucks. Now many are shot or shot at from way out.

Not sure the impact of two tags, they may still sell out either way. Technology isn't helping them by any means but I hunt some areas where there are hardly a hunter and numbers are way down so tags or technology are not hurting them there and there are still less deer year after year so predators or disease must be killing them. I don't find dead deer anywhere so can't really say for sure.most my friends try and trophy hunt and while they may have two tags they are lucky to fill one..

I didnt mean to imply these were the biggest sources of impact on blacktail numbers by any stretch.

I believe the things that have had the most effect may as well be tossed out. One, predator control, its NEVER gonna get better only worse with wolves. And soon I think bears will be closed. But fact is we will never hunt cougars legally in this state again. Bears eat a lot of fawns.
The other is habitat. Again I dont think we will ever see a change here. Mule deer habitat is most affected on the winter range, by people moving in and building subdivisions. Blacktail habitat is most effected on all of their range by
Fire suppression and the huge cutbacks in timber harvest. Many say things are healthier with the current balance. Maybe. But it doesnt make for big population booms of blacktail deer. The fires and tiber cuts of the 70's and 80's made for great blacktail numbers into the late 90's to early 2000's.

The way I feel dropping to one B tag can help is this. Most of the less successful hunters dont buy 2 tags. So the group that buys 2 are much more likely to fill 2 than the others who buy 1 are to fill it IMO. Not always true as there are people who are forever the optimist who buy 2 tags every year and rarely fill one and there are people who always buy 1 one and fill it annually, but on average I think it takes some amount of confidencerhat the first tag will be filled rather easily in order to justify buying the second. This often comes from viewing their own historical successes. In other words about 20% of b zone blacktail hunters kill about 80% of the bucks that are killed annually. Many of these 2 tag purchasers will openly say they will kill a meat buck then hunt for their trophy. Many of them will tell you that if they see a small buck on the last day they will fill their second because like me they like to eat venison. These hunters will likely know where to find a second meat buck because they are the better hunters of the tag buyers and they have probably also spent the most time in the woods.

As for the tags still selling....maybe. B tags sales have fluctuated the last few years from selling out soon enough for them to become a restricted tag to other years being unrestricted. And that is with every serious deer hunter knowing they WILL sell out before deer season. So with a one tag limit I think it would be well into rifle season before they would sell out if they did. And the later tag sales would be to the less serious least successful group of hunter so I think overall hunter success per tag would drop pretty good.

Technology we seem to agree upon. But I will get into more detail about why I think it is having a larger effect than some think. One is the most obvious but maybe not the most detrimental and that is the 1000 yard rifle and its effective use. Then there are the rangefinders that make them possible. But I think the biggest one that is probably optics. From the scopes on those 1000 yard rifles and the rangefinder mentioned above right down to binoculars. In the early 2000's almost nobody my friends and I saw in the blacktail woods owned a decent pair let alone used them to find deer. Sure they may use them (if they had them) to look at a small buck to see if he was legal or occasionally to look at the deer standing in the open across the canyon but they rarely glassed. Huge difference these days.

Dont think I want rid of these tools. I love my ling range setup and my swaro binos. But they had a big effect on my success and I was effectively killing deer at 500 plus with a 3x9 leupold with a simple duplex and using my cheap binos to glass in the timea I described above. I dont want to be told how to hunt or to tell others but I know the effects of these tools.

Sorry for the long post. And again congrats on a great buck.

Bill can't argue with any of that, seems pretty accurate to me. I often wonder how I killed deer without the tools we have today. I don't think the technology is going away and will only improve and I also don't see us doing anything in Ca to help with predators.
Wish I had a solution to make it better but without predator control and habitat improvement I don't see things changing. More than likely tags will be cut at some point and B will become a draw tag and I don't see this helping the herd a great deal but maybe sustain the already lower numbers.
I do feel fortunate to have the opportunity to hunt each year but with the amount of effort and time and money spent with limited success it has me considering other options. Thanks for the congratulations on my buck and good luck to you.

I don't know for sure where our deer have gone but I think it all adds up in the long run. You have to remember the 20% success rate includes deer taken on private property. There are many landowners who manage the land properly by logging and to some extent predator control (although not official). They try to do the right thing.

I never was a top notch deer hunter but I seem to have more than my share of luck. I only got out once this year and only saw 3 deer. It seems the buck finds me and not the other way around. Just being at the right place at the right time.

When I was setting up camp, I discovered I forgot my propane. Ugh! I drove about 15 miles back to Ruth to get some. It was getting too late for my planned evening hunt so I decided to drive the old 4X4 road back to the top, just to see some different country and reminisce about the old days. It's narrow and all brushy and a deer would almost have to be on the road itself to even see it. The only deer I saw was a buck and he thought he was hid so didn't run. Just a small forked horn and I couldn't keep off the trigger. Not real proud of it. 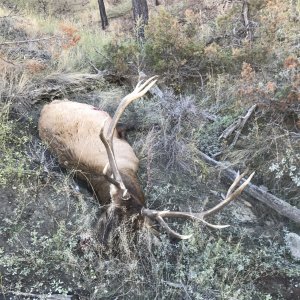 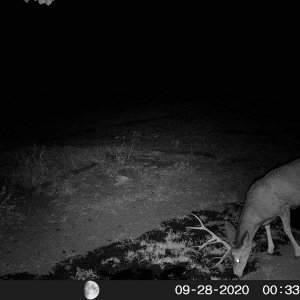 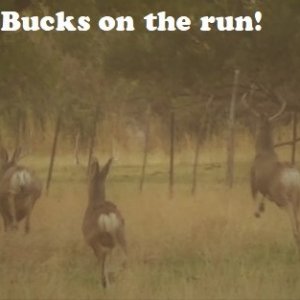 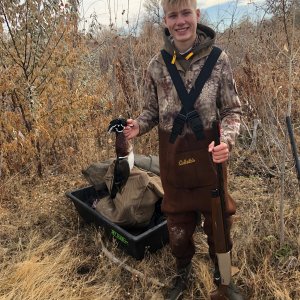 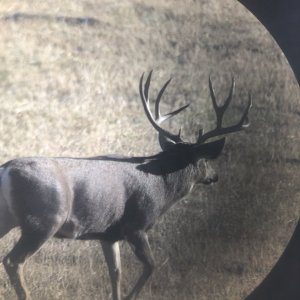 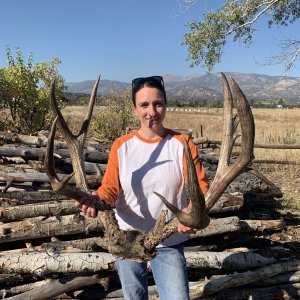 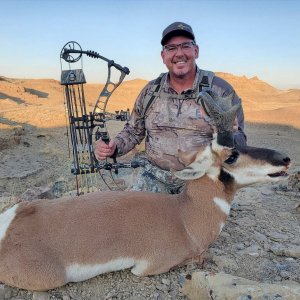 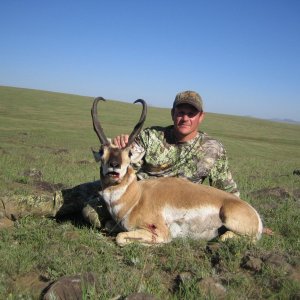 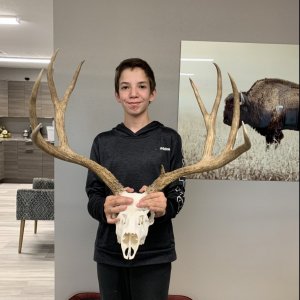 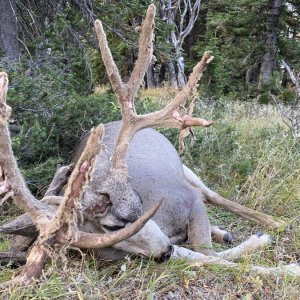 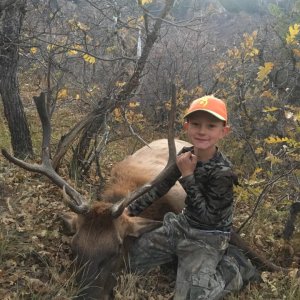 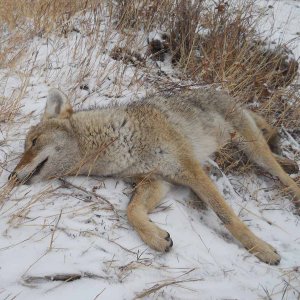