This last weekend was one for the memory books! My good buddies Austin and Matt met me up at a spot in central Idaho for our 4 day general hunt. Austin just moved to Eastern Montana about 6 months ago for a job and was ready to get back to Idaho and hunt with us. We've hunted hard for a few years together without pulling out anything bigger than 2 points. We all did a lot of research and I studied books on mule deer behavior this past off season and there was no doubt in my mind that this was our year.
Matt and I went out a couple of weeks before opening to find a few 3 points and one really nice 4 point I would say about 28 wide. There was too many things going on opening weekend for us to make it up so the next weekend would have to do.
I showed up at camp Thursday afternoon to set up camp and meet some family up there. I could not believe the amount of people. Every camp spot was full which was pretty discouraging. My little brother and I took off to see if we couldn't find the big buck I had seen a couple weeks prior. We showed up at the spot to find boot tracks going right into where we needed to sit and wait. We ended up staying there without spotting a single deer. The 4 wheeler ride out in the dark showed a few does and a nice 3 point that stood in the road for about 20 seconds.
Austin showed up around 1:30 that night after his 12 hour drive and told me Matt planned on being at camp around 5:30 to start our morning hunt.
Friday morning us 3 left camp before 6 in hopes of getting to a glassing point I was wanting to be at before shooting light. It is about a 15 mile 4 wheeler/dirt bike ride thanks to other camps being parked the 8 miles of truck trail we could have camped by. We made it up about 12 of the miles I was hoping to when my old trail 90 said she needed to cool down before going uphill any farther. It was getting close to shooting light so we decided to walk blind from where she decided to quit at. We made it about 200 yards when I looked through the trees and spotted a feeding deer. It was right at shooting light so it was hard to see if there were antlers 200 yards away. We walked through a little patch of trees to sit and take a harder look, doe. Right after sitting down I noticed a large deer right above her feeding. We studied him for about 5 seconds and he turned his head, DECENT BUCK! We all got really antsy and I told Austin he could whack him since he just drove 12 hours from Montana. We previously agreed whoever spots it shoots first but I was wanting him to take the shot. I got my gun ready just in case he missed. We steadied waiting for the buck to turn broadside at 175 yards. BOOM! Austin shot while the buck was turned straight away from us. He starts running uphill fast and I put my crosshairs right behind his rib cage for the quartering away shot. WHACK he trips, turns around and runs downhill about 50 yards into the timber before we hear a hard crash. We celebrate bumping fists and shaking hands excited about our first buck bigger than a 2 point together. Austin accidentally bumped his trigger causing him to shoot, he ended up hitting him in the lower front leg. We walked up and found him dead right where he went into the timber. I hit him perfectly at the back of the rib cage with nearly all of his vitals blown up from my 270 weatherby. Excited we took pictures and got him dragged to the 4 wheeler easily.
Here is Austin and I with him. 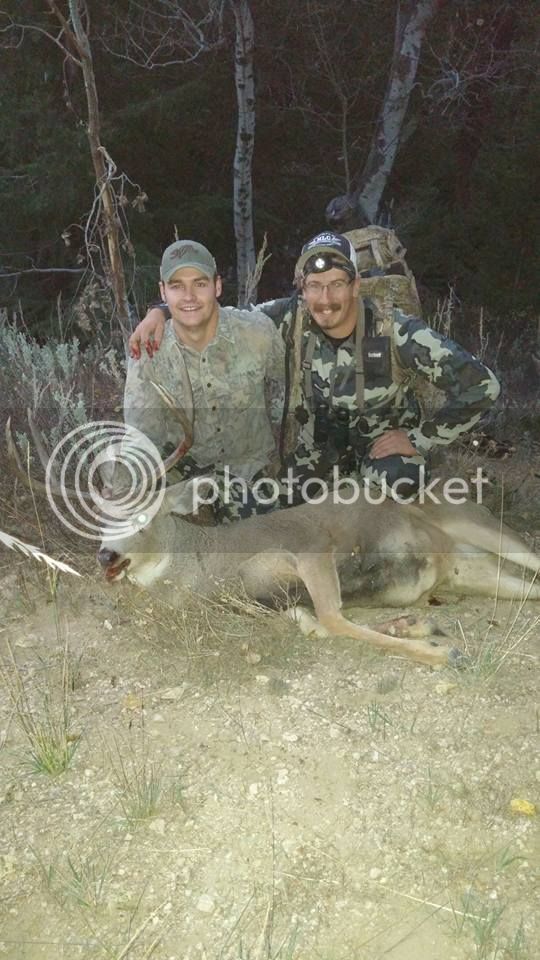 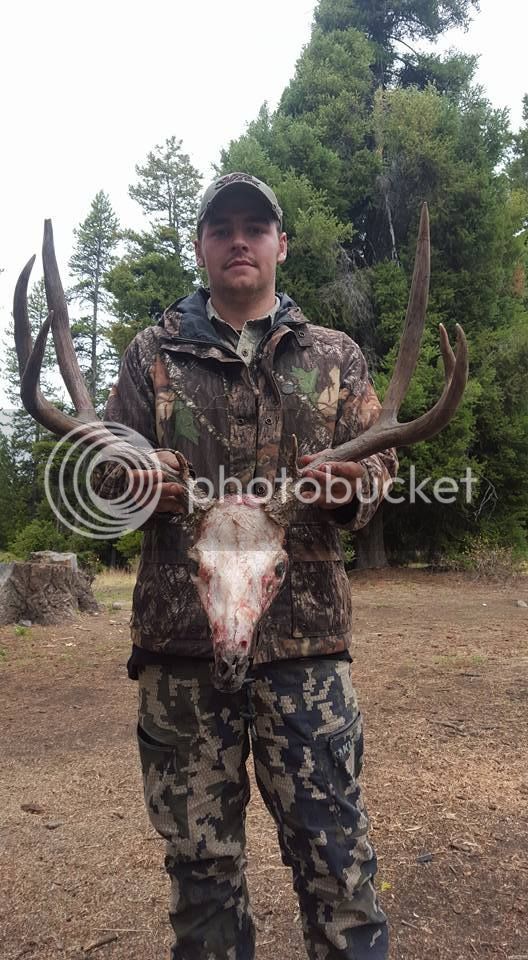 Friday evening found us at a glassing spot a few hours before dark. We saw around 40 does within shooting distance and glassed a decent 3 point about 1500 yards away we weren't willing to go after with the draws we had between us. We made the plan on making it up to the spot we were wanting to hunt that morning. So we would load the bike and 4 wheeler into Matt's truck driving the 8 miles to the beginning of the 4 wheeler trail so the 90 didn't endure too long of a drive.
Saturday morning came and we made it to the end of the trail a little later than expected. A sprint/hike and we made it to our glassing point right at shooting light. We sat there a couple of hours only spotting a little buck hanging out with a few does heading to the timber. Matt was taking a nap while Austin and I glassed over and over again with no success. I settled my pack in a comfortable position to join Matt in a nap. I laid my head back and within seconds of closing my eyes I heard some twigs break to the draw at my side. I sat up and looked, nothing. I stood up and scanned again, BUCK. I drop down and tell the boys to get their guns there is a decent buck 80 yards from us feeding within yards of a heavy brush pocket. Austin and I stand up as he steadies his gun free hand. Now the buck is looking at us. BOOM miss. He shoots again and whacks him good. He walks about 5 yards to the brush pocket and tips over backwards. We give a bunch of fist bumps stoked about Austin's buck. A short walk down revealed another buck on the ground. 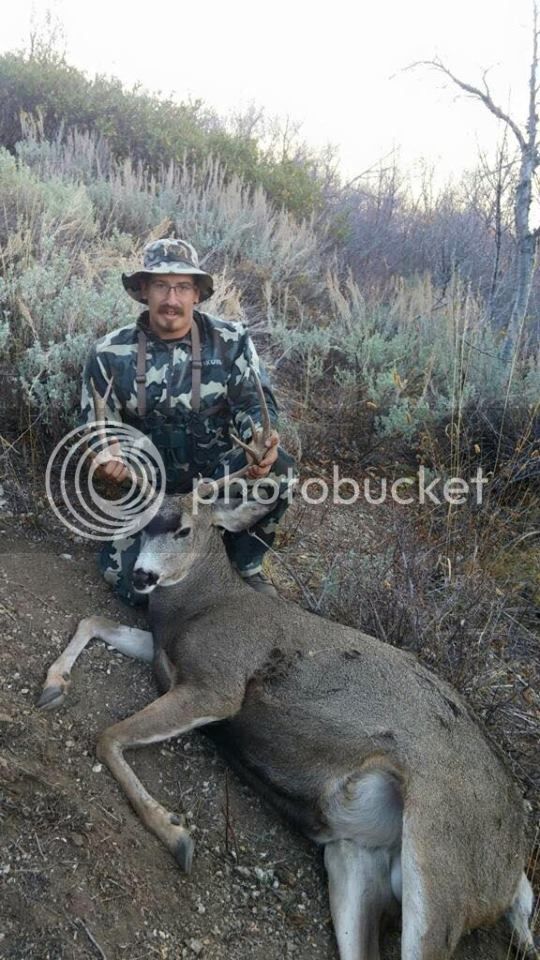 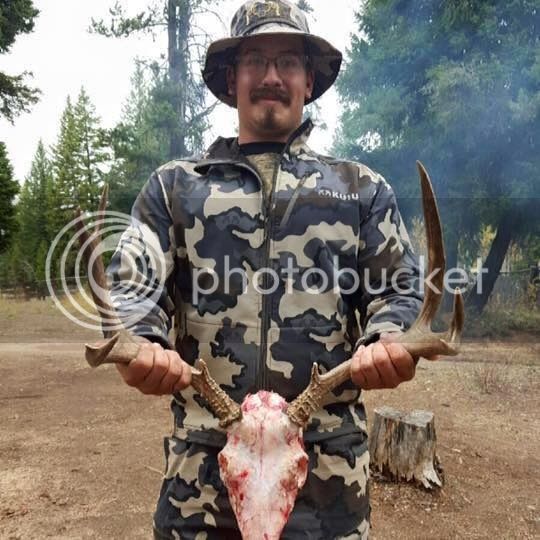 We cut him up and hiked back up to the 4 wheeler ready to show family at camp that we know how to get it done. Some celebration and we were ready to go out and find Matt's buck. Saturday Evening found us out glassing a spot I'd never been before but was where I thought we could find the 3 point my brother and I seen a few nights ago in the dark. I got bored and took my nap I wasn't able to get to earlier in the day thanks to Austin's buck. We seen one deer and came out wondering what our plan was for the morning. We got up early once again and headed for the trail. I wanted to try out a spot lower on the hill than where Austin and I killed our bucks. We got to the trail in Matt's truck to find my 90 not wanting to start and the 4 wheeler not running well. With only 2 people being able to get down the trail Austin hiked up looking for his dad and sister. Against our better judgement Matt and I took off down the trail with a poor running wheeler. We got in there before shooting light and hiked up. Saw tons of does but no bucks so we headed back to the 4 wheeler. Got down the hill and sure enough it won't start like we figured would happen. We hiked up the trail a few miles to find Austin back at the truck around noon. Now it was time to hurry back to camp to see if anybody with a 4 wheeler is there still to tow us out. We were the only ones planning on staying til Monday and weren't sure if the family had packed up and left. Luckily my stepdad was still there so we grabbed his 4 wheeler and towed Matt's out.
With no way to get down the trail where we found our bucks we contemplated on what we planned to do. Our plan was to do a little road hunting in the evening to see if we can't find a spot to hike in the morning. We drove around and found a trail that had no motorized access thinking it seemed promising for the morning. We were driving out and I spotted a doe sitting right on the trail which got our hopes up a bit for the morning. We decided to do a little more road hunting thinking the deer might be moving around after the rain and not as much pressure with everybody leaving that day. We headed towards our 4 wheeler trail in hopes deer would hang out around there. A couple of miles away Austin yells DEER! He grabs my binos since his got messed up and need a little retuning at the shop. "I think that's a buck. Jayden look and make sure" he says. I grab my binos, found him and knew instantly he was a decent buck. Now we start scrambling getting Matt's gun and jump off the road a bit. The buck stood there and looked at us for what seemed like forever. No joke it took about 2 minutes for us to point this deer out to Matt. He just could not see him through the brush and trees at about 200 yards. I almost grabbed his gun and whacked him to fill my second tag knowing he was bigger than a 2 point. It was getting pretty hectic knowing the buck had to move sometime. Finally he finds him and struggled to find his rest. He gets it and settles in for his shot. BOOM he shoots right over him. The buck got sick of looking at us and starts walking. Within seconds another BOOM and he drops in his tracks with Matt's 270 win. We hugged and bumped fists once again with our last buck on the ground. What a relief! Too excited to think we hike down the draw to get up on the other side to find him. We get up there and can't find him anywhere so Austin goes back up to where we shot and look for where he was standing. He tells us where to get to and I see him laying dead in a bush. I run down and yell "he's our first 4 point!". More celebration and pictures begin when the boys show up.

Matt with his buck 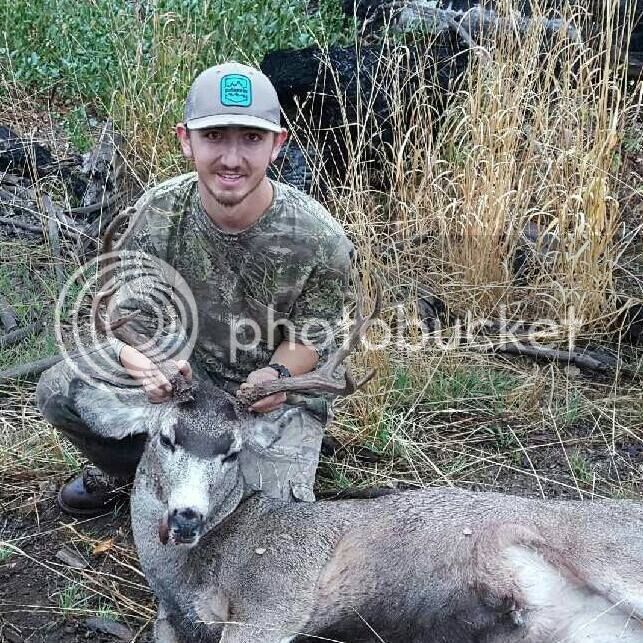 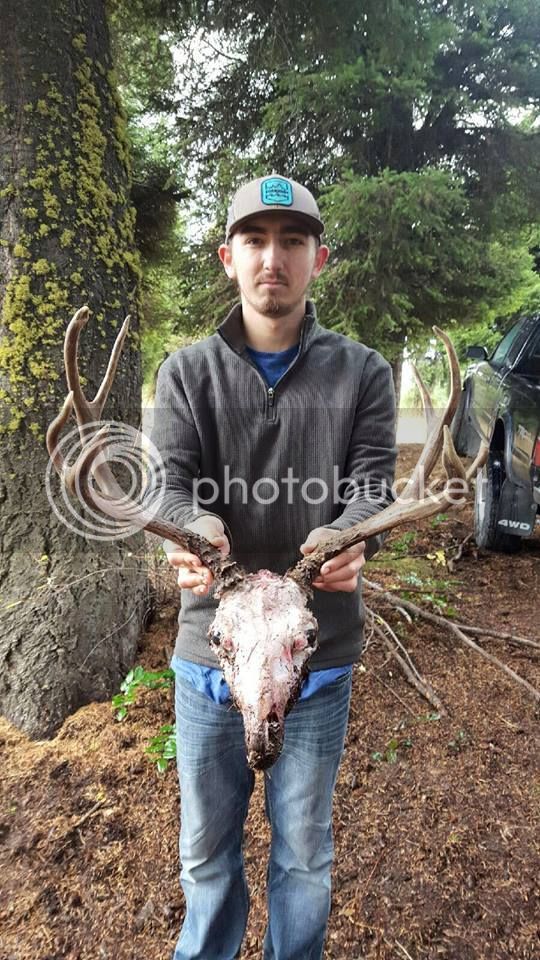 We were very blessed this weekend in whacking some bucks that will forever be cherished. By far one of the best trips of my life and we are already planning on next year!

My little brother and cousin both whacked does as well. It was really cool to see them tell their stories as it was my brothers 2nd deer and my cousins first. Austin, Matt, and I put in the most work every day being the first ones to leave and the last ones back to camp. We were determined and it paid off big time. 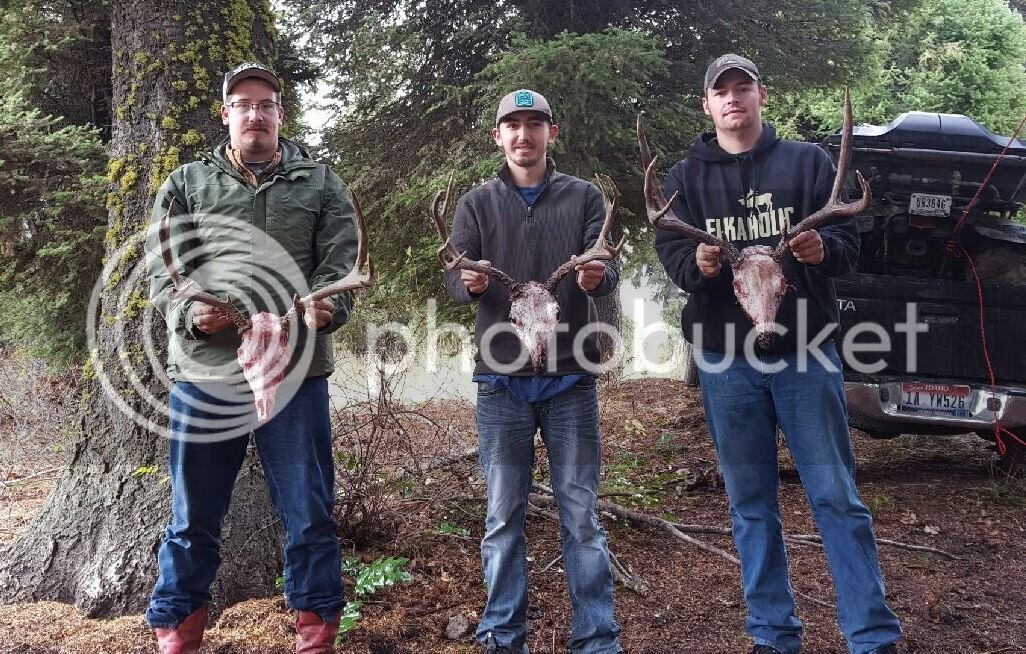 My girlfriend has an elk tag that opens up here at the first of November and I also have another deer tag I will be using to hunt the big boys with a bow in the rut! Plenty more to come.
You must log in or register to reply here.
Share:
Facebook Twitter Reddit Tumblr WhatsApp Email Share Link 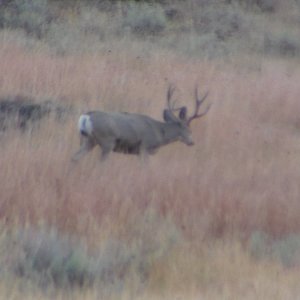 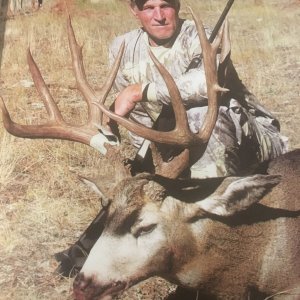 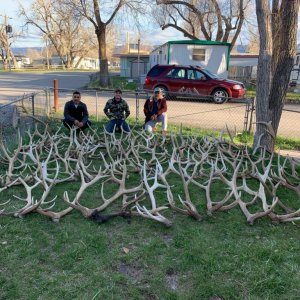 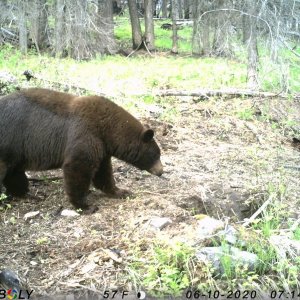 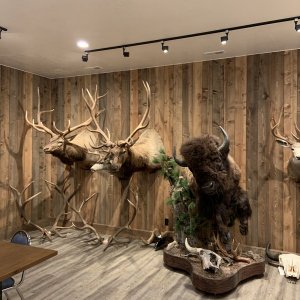 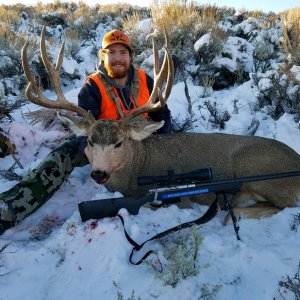 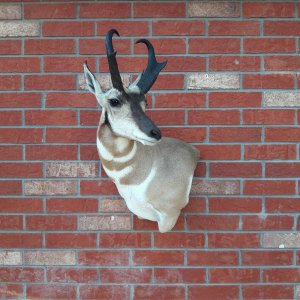 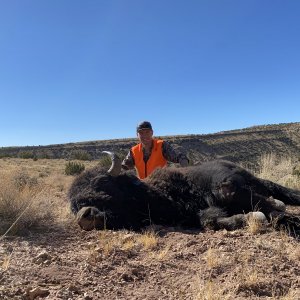 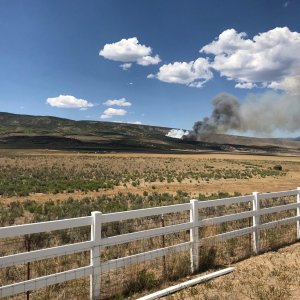 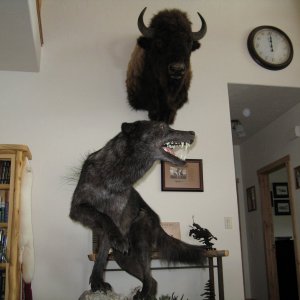 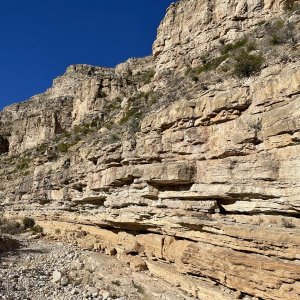 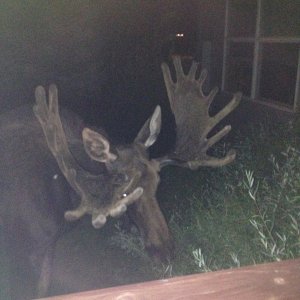