Staying busy with a trap line

Well folks most of the seasons are closed. But since I practice what I preach, and the kids had a three day weekend, I loaded up the truck with trap supplies, weapons, and food and headed to the woods for a trapline adventure.

Friday I got 9 coyote sets, 3 bobcat sets and 2 beaver sets out. I wasn't planning on going after beaver but I found one that I considered a nuisance. Instead of chewing down the usual little saplings and bushes he went after a giant oak. Well I ain't gonna just let that happen on my watch. 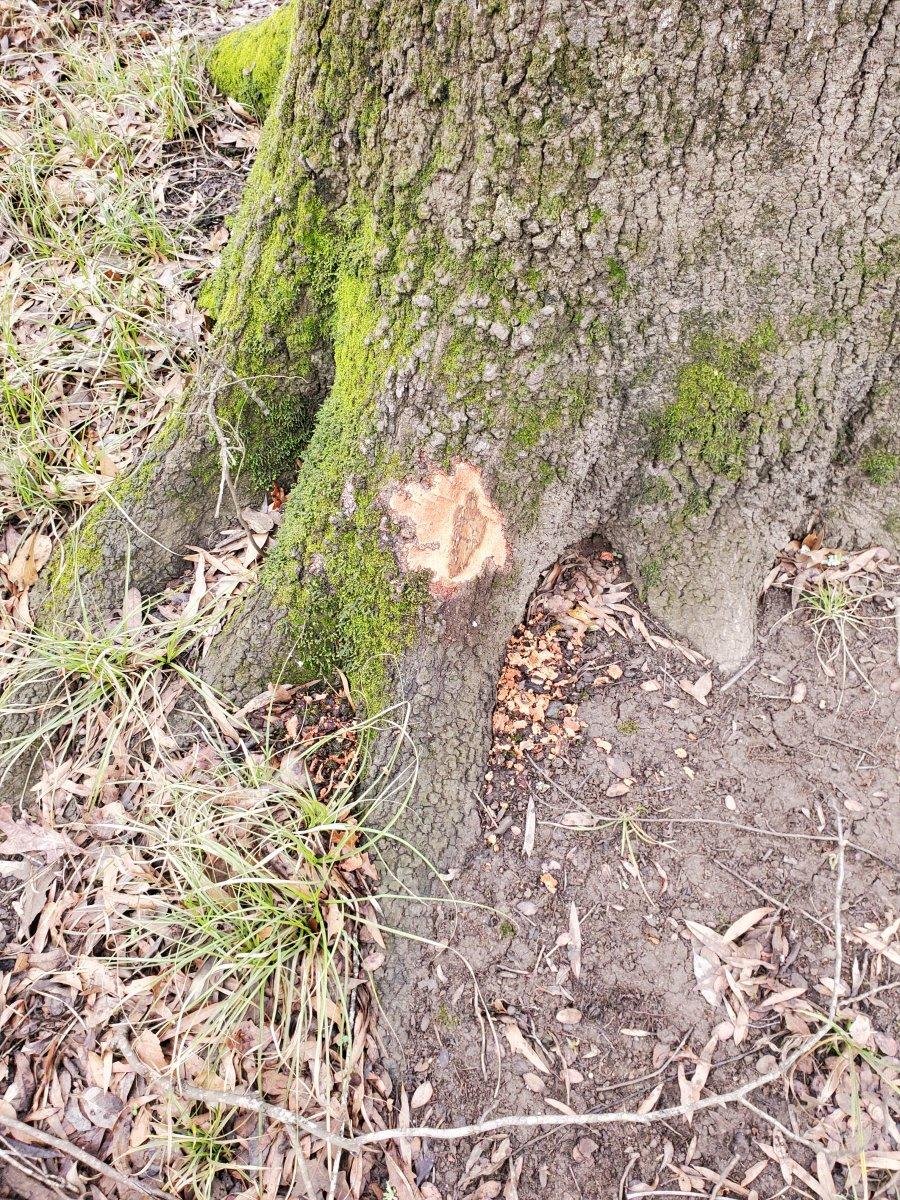 Most of my coyote sets were territorial type target sets. I was finding a lot of sign and they are heavy into their breading right now. Pelts on coyotes are garbage but I am trying to help the fawns get a jumpstart this year.

Check day one and I had one coon and one very close call with a coyote. From the prints it looked like I missed a female by half an inch. One thing people need to understand is this place may be the highest density of coons in the world. I always know they are going to be a problem here. They love playing with traps. 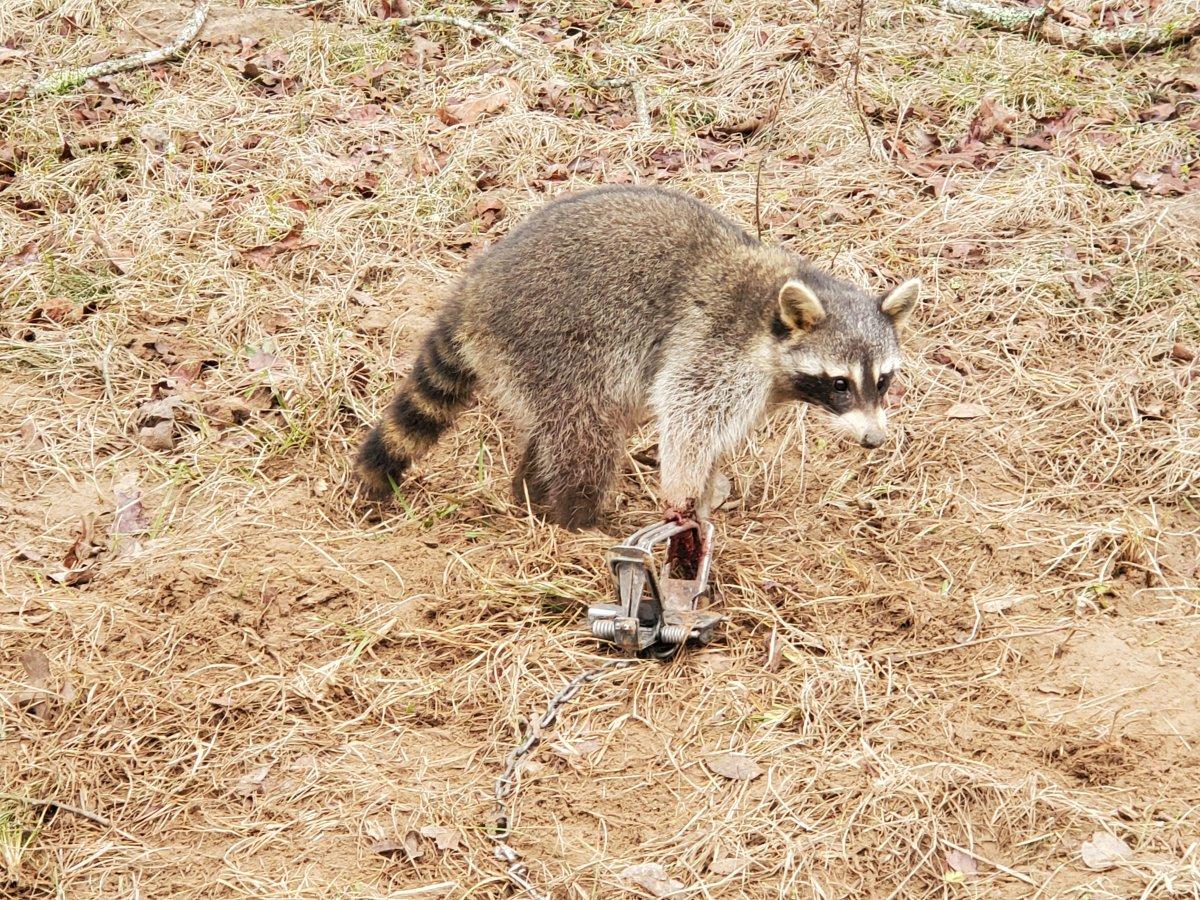 Check day two and right off the bat we had a coyote. He was a big male we had targeted with three traps set long down his scratch line. Adios varmint. 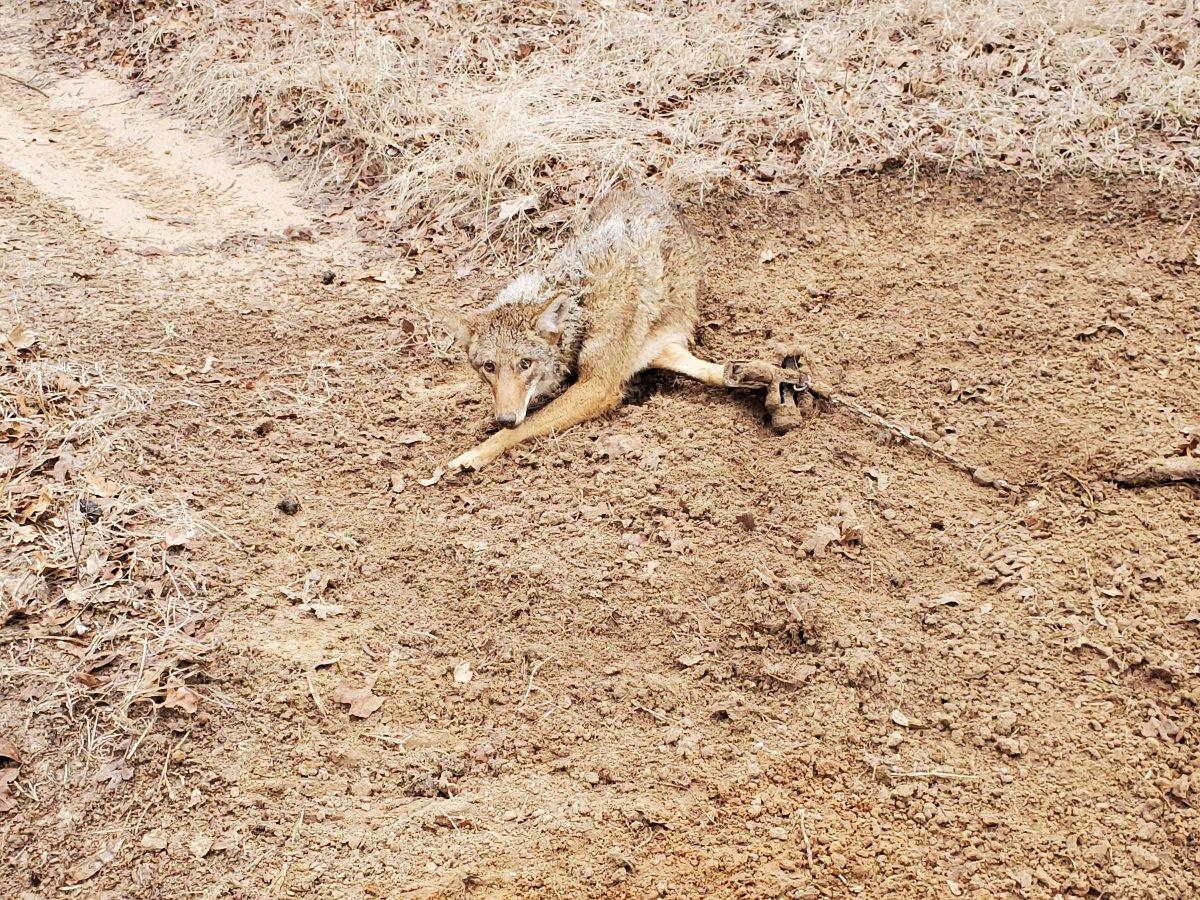 A few traps later we had his good buddy nailed in another set. WHAT A DAY! 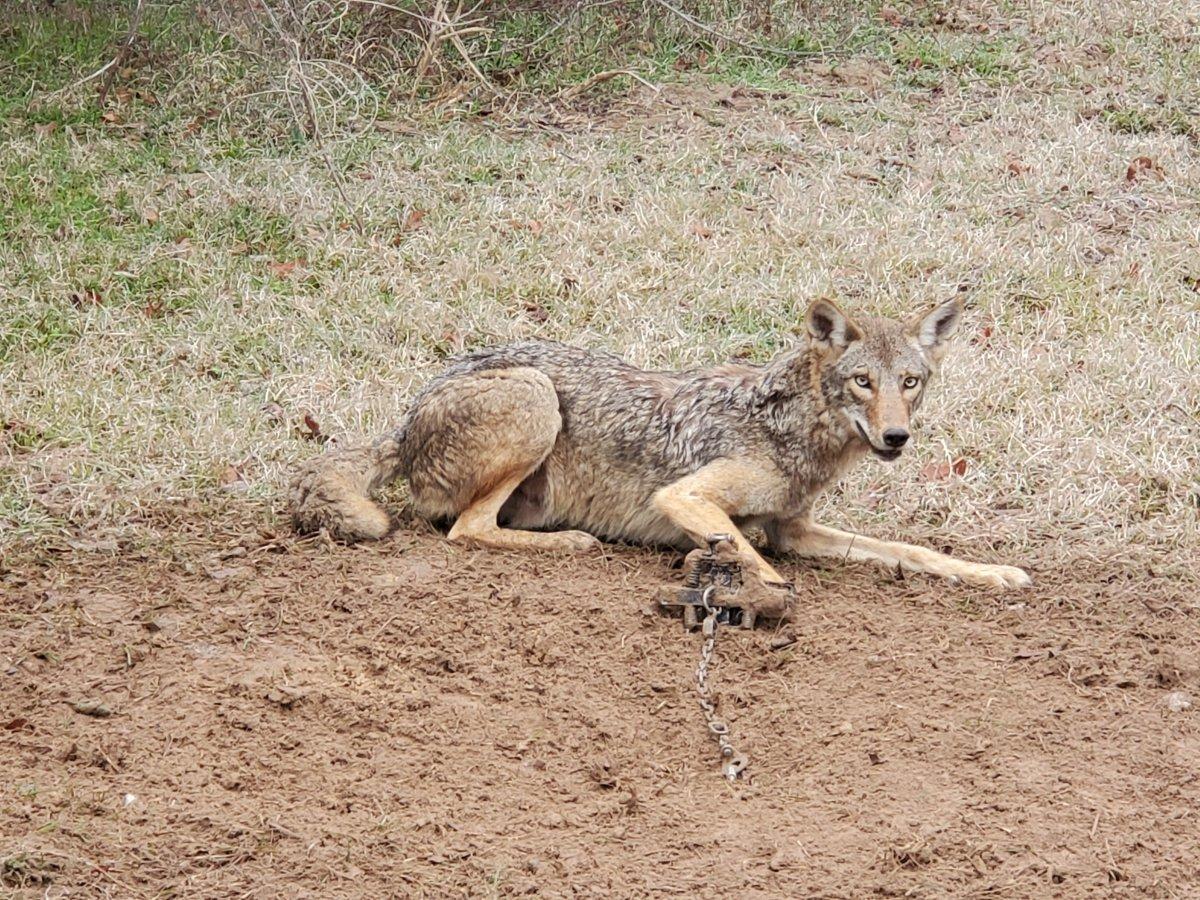 We had another trap get scratched and flipped out by a different coyote and we caught three other coons. They are a real head ache here.

Day three and the weather had really crashed. It was bitter cold and several inches of snow had fallen. We wrapped up and headed out. At one trap we had a coyote get hit but it looks like I only got a toe and he pulled out on the reaction jump. Just a damn lucky dog. Then I got to one of my bobcat sets and guess what was in it. Yep! Mangey varmint number 3. 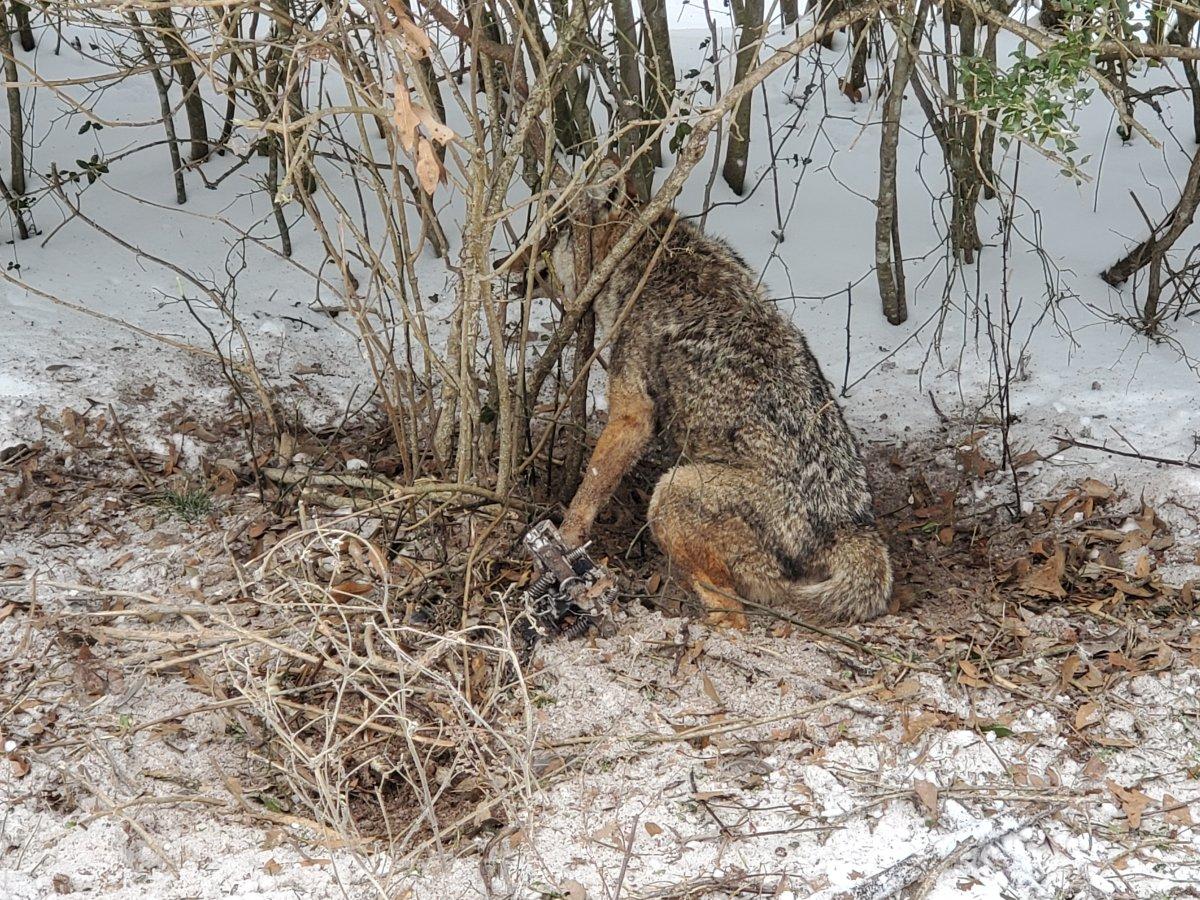 After dispatching the third coyote we went to check the beaver sets. I discovered that one had been visited by the beaver. He had scratched and slid all over my fake castor mound and then somehow flipped my trap over without firing it. I think it was just bad luck and I don't think the beaver thought it was anything more than typical garbage he finds in the river every day. Bad luck for us and the oak trees but good luck for him.

After day three everything just got worse. All the predators shifted there patterns with the ice storm and we were getting almost no action and most of our traps were getting frozen into the ground. The upside is apparently coons don't like deep snow and they went and holed up for several days. Thousands of birds froze to death. They were all over the edges of the thickets and every day you could see coyote and bobcat tracks walking the edge lines picking them up.

Finally on the next to last day everything thawed out enough to get some action going again. In the slow down I actually found the slide the beaver was using going from the river to the slew. On Saturday I was able to set a trap there with a drowning cable and a fake castor mound. I was giving myself a very high chance of getting him this time but I only had one night.

On the last day we were checking nd pulling traps. The coons were everywhere again and we caught 2 more coons and an opossum. Last we went to check the beaver set at the river. I could see my drowning cable stretched into the river. WE GOT HIM! Or I thought we got him. I started pulling in the cable and it felt like nothing was on the end of it. Then I saw some fur roll to the surface. Sure looked like a small puny beaver. Imagine my surprise when I pulled it up and IT WAS AN OTTER! No bull I've always wanted one and now by total coincidence I got one. 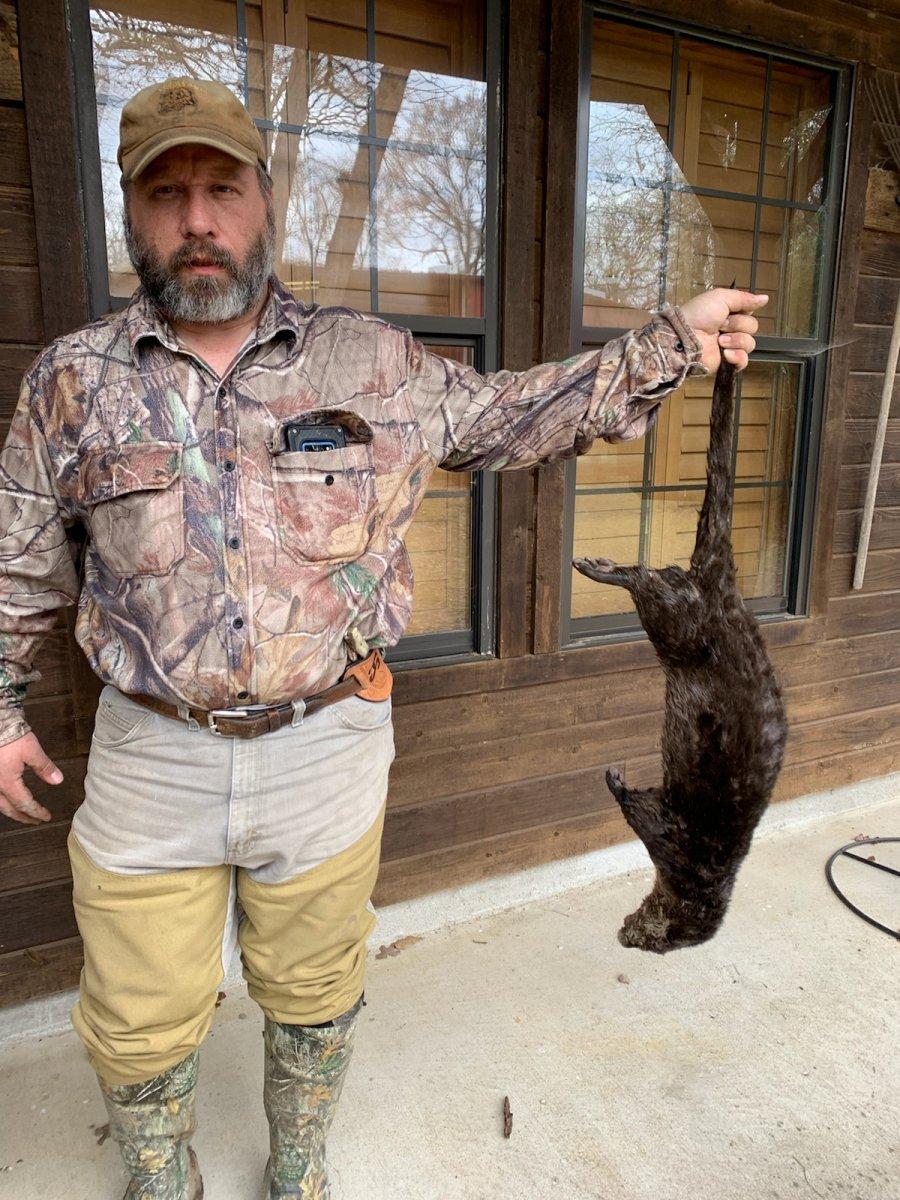 Well I'll have to get back up there soon and nail the beaver. Plus it seems I have at least 5 more coyotes to kill. Its gonna be fun.

Guys and gals get out there and actually find some adventure and hunting.
There's plenty of it in the off season. AND TAKE SOME KIDS WITH YOU. 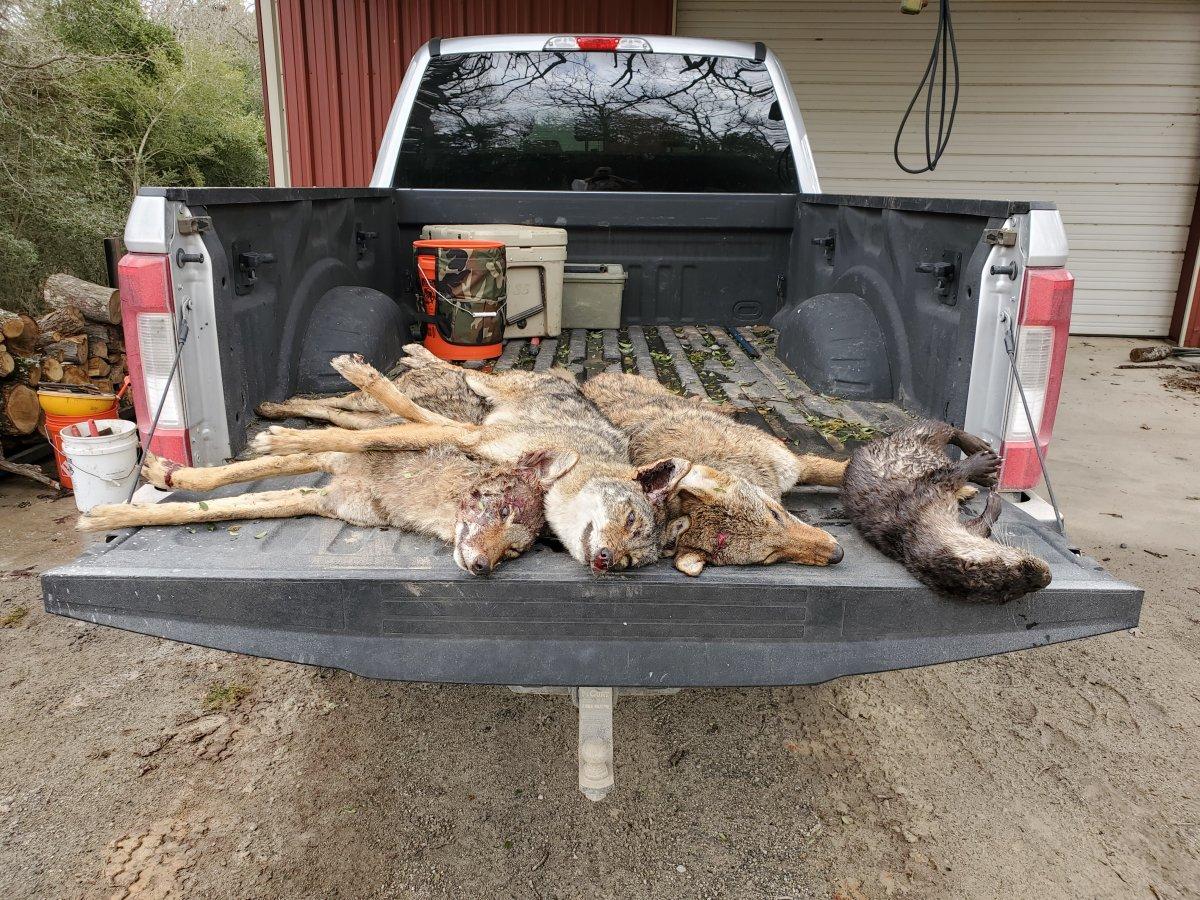 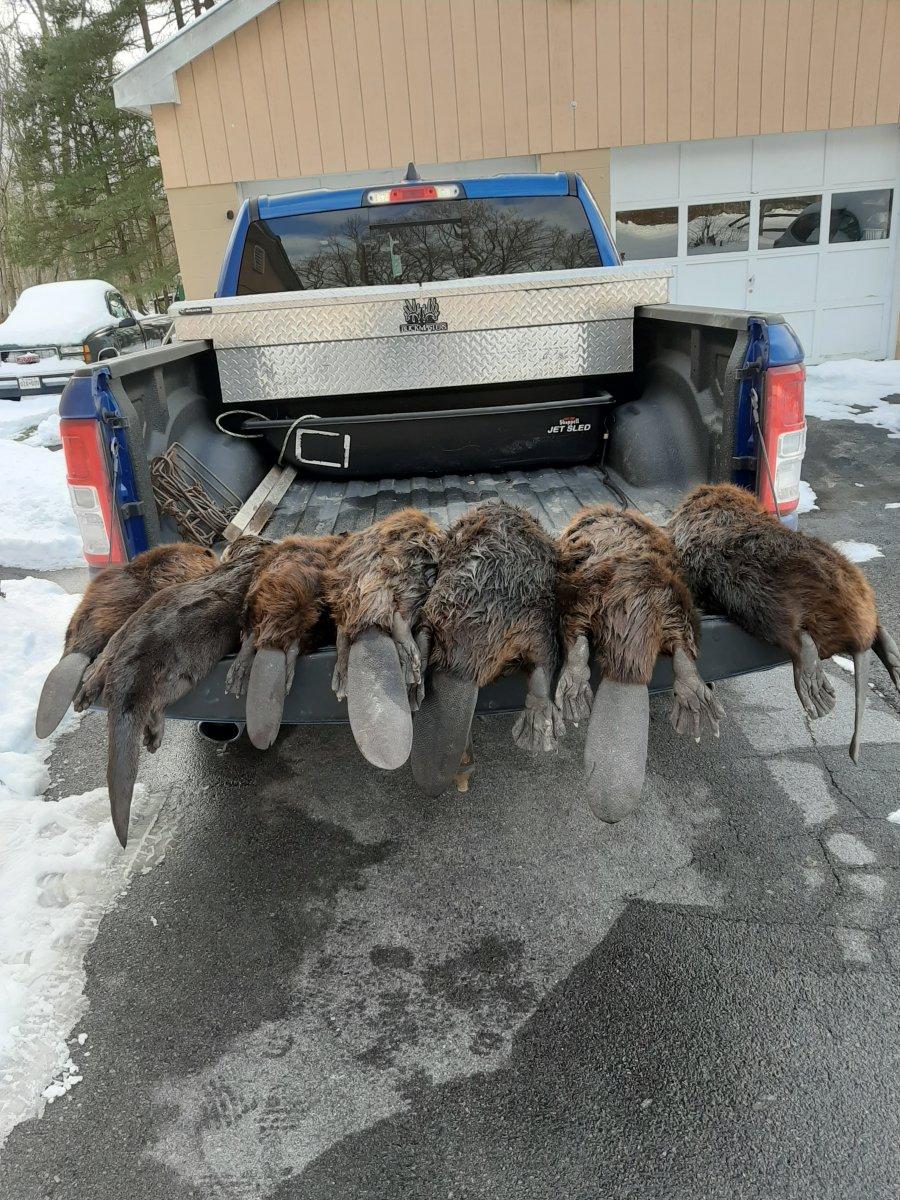 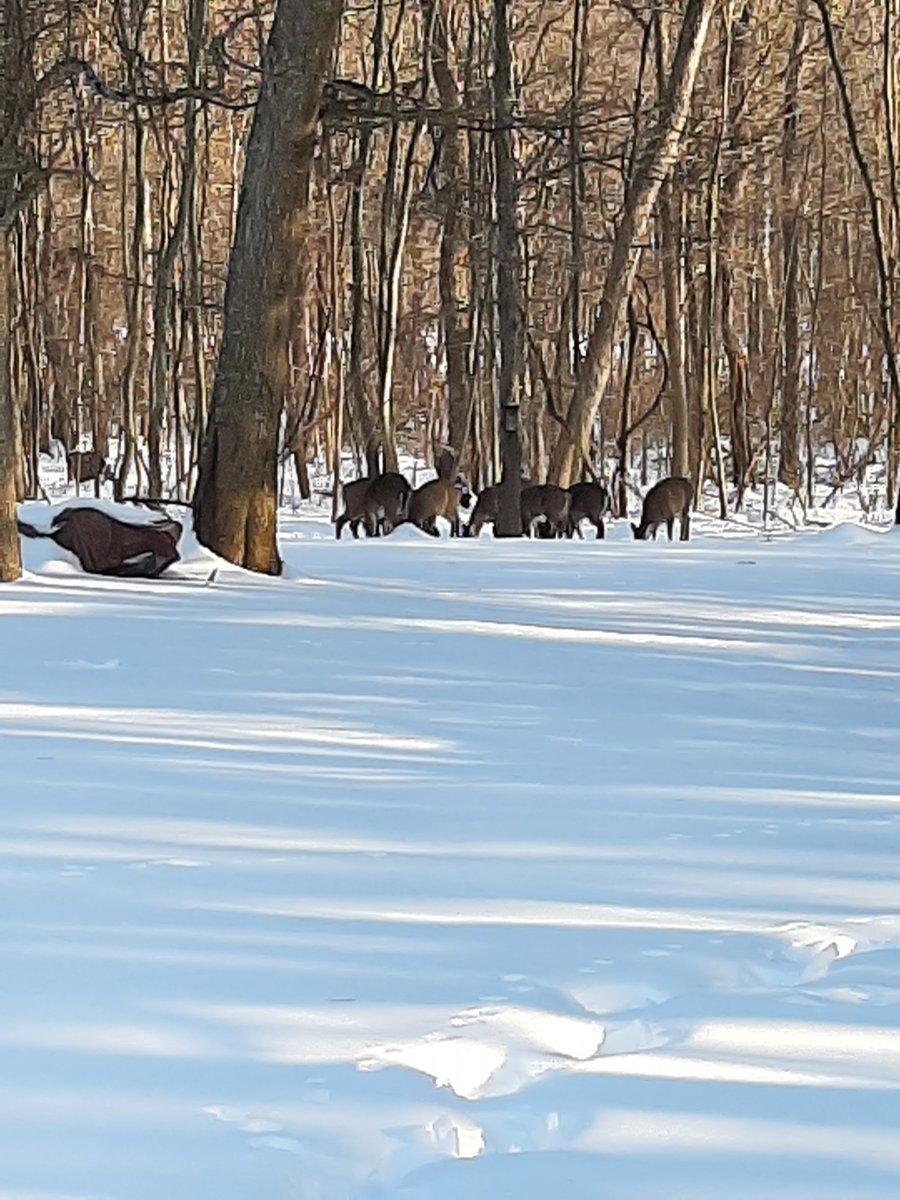 Trapping beaver and otter,lots of snow and hungry WT deer

Whiteantlertip,
Do you eat Beaver?

Daaaaaaaang I need to take some beaver trapping lessons from you for sure.

That was one days catch , the Most I ever caught was 145 one winter , a lot of work to do it tho
D

Takes alot of pre season scouting to pre mark areas with runs and channels so when she freezes up it dont take near as long, digging snow and chopping holes that wont produce. If its open it is a total different ball game . Trap all day and skin half the night

Keep up the good work Tristate dang good catch , always a thrill to check that next set

Used to have the time to trap...miss it. 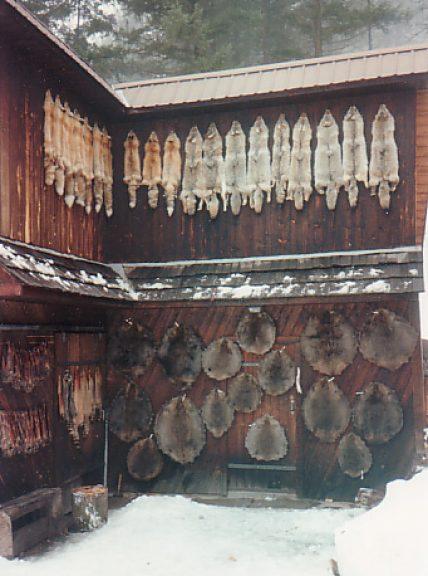 Never did take many trapping pictures. Took this picture on account of the cross fox. 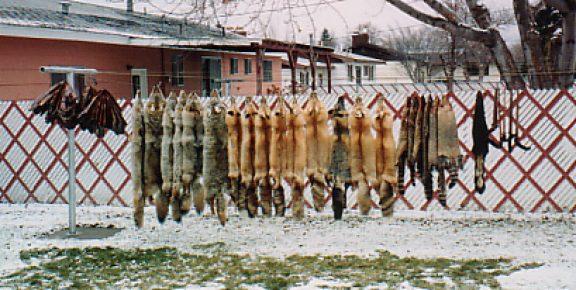 Outstanding Tristate. I'd like to see the otter mount if and when you do that.

whiteantlertip said:
That was one days catch , the Most I ever caught was 145 one winter , a lot of work to do it tho
Click to expand...

I waved the white flag at about 30 a year max. When prices tanked would only trap enough for bobcat/marten bait.

That was the most for me , I have cut the winter trapping back to , due to low prices. I trap beaver now year round under a state wildlife co op license , catch quite a few that way

whiteantlertip said:
That was the most for me , I have cut the winter trapping back to , due to low prices. I trap beaver now year round under a state wildlife co op license , catch quite a few that way
Click to expand...

Cool, last few years I trapped MT I did the same thing...was about impossible to keep up with landowner complaints. Gave most of those that weren't close to prime to guys that baited bears in Idaho.

Yep, no what you mean. I give most of my meat to some friends who have bear,coon hounds . I get more money from a beaver on damage complaints than a fella could ever get on the fur market

Well...at least you were hijacked by the best of the best Tristate.....and apparently women's apparel isn't to be mentioned here either.....
G

Ended with with 45 that yr 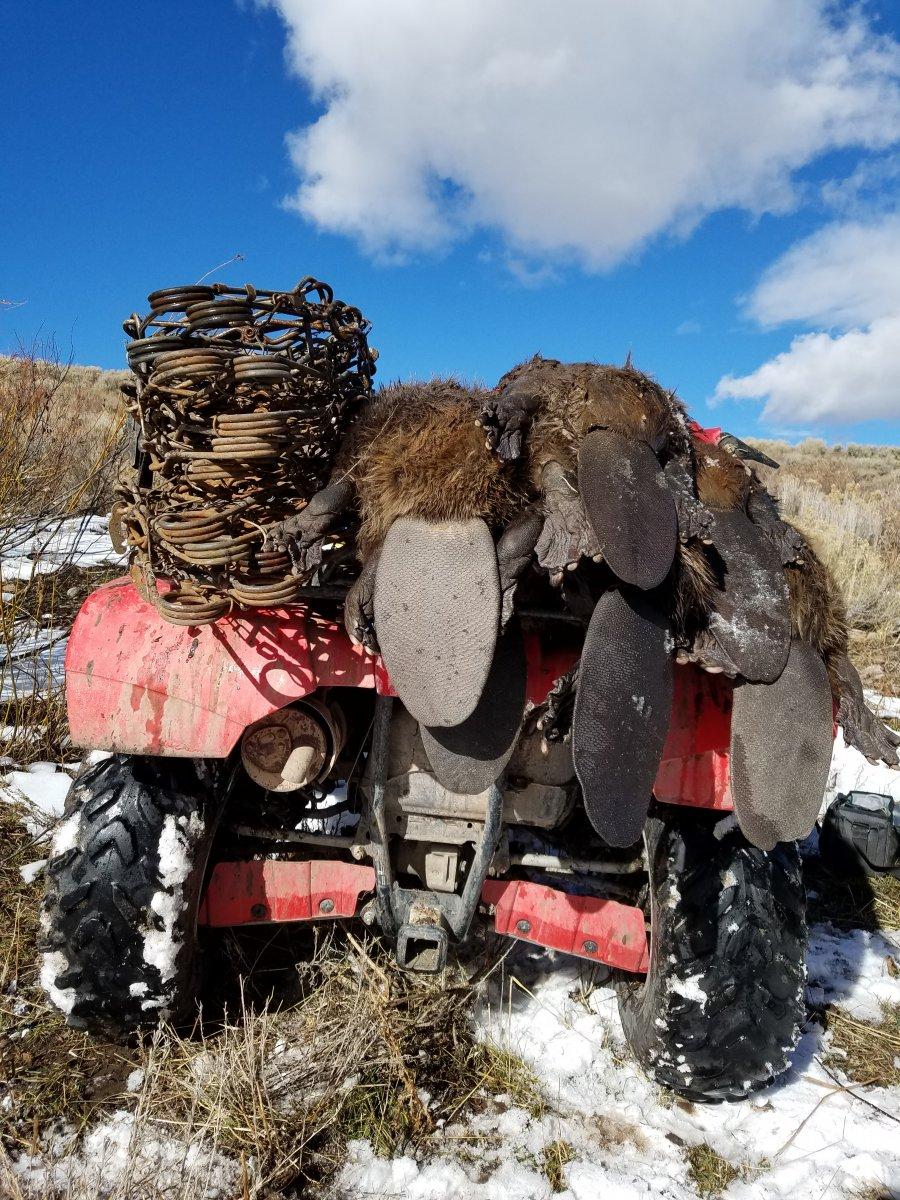 Thanks for the kind words fellas. Hope yall have plenty of luck on the line. I'll let yall know if I pinch that beaver.

If that is you holding that otter Tristate ....you are the spitting image of sage advice.....

I never met Sage Advice. It's hard to believe there are two men, not related, that look just like Brad Pitt on the same hunting website.

Update time. Last week I got to go back out to the farm for round 2 of beaver trapping. I set two traps Friday evening. Saturday morning I check trap set one. It ain't a beaver. It's a damn scuba coon. 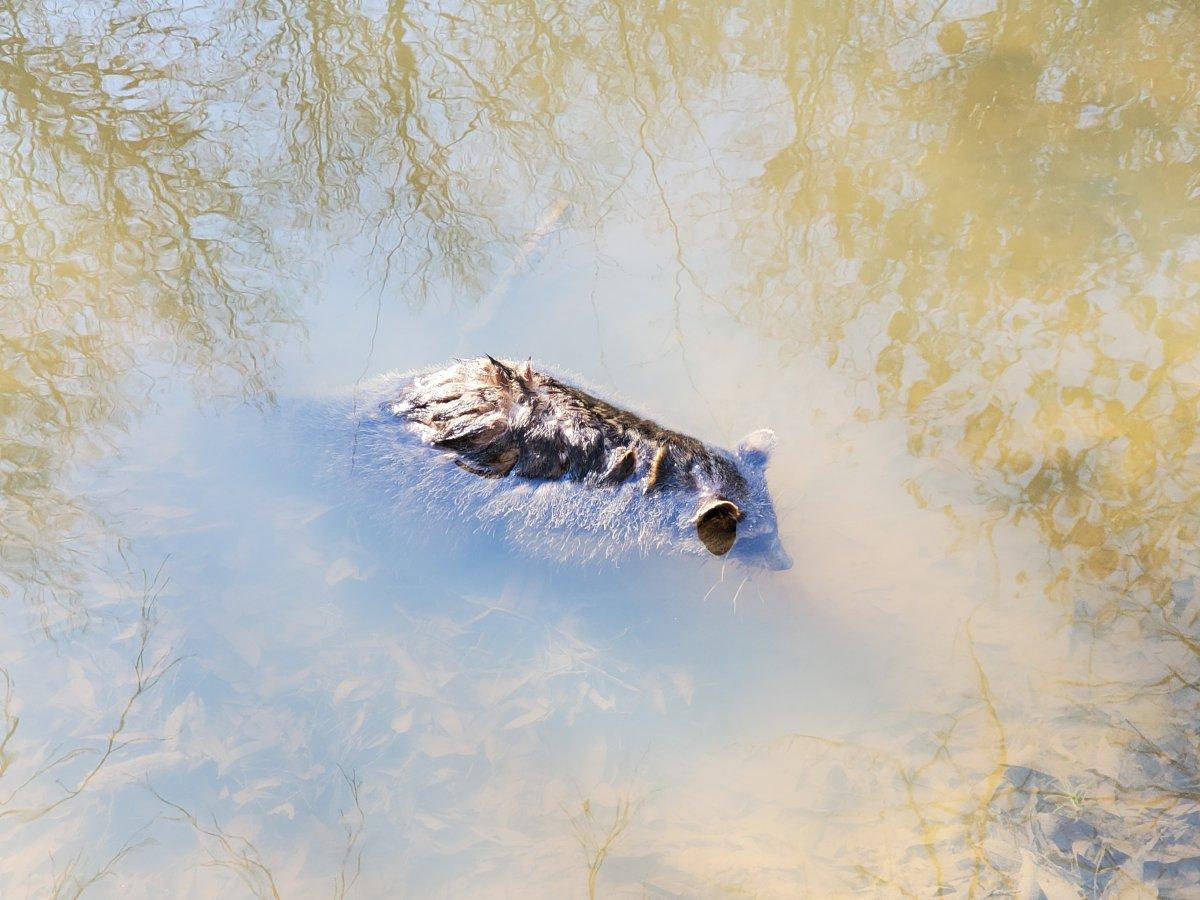 These dudes get into everything. Even a submerged beaver set.

I headed over to my other set. The trap was gone and at the end of my cable was one very dead beaver. 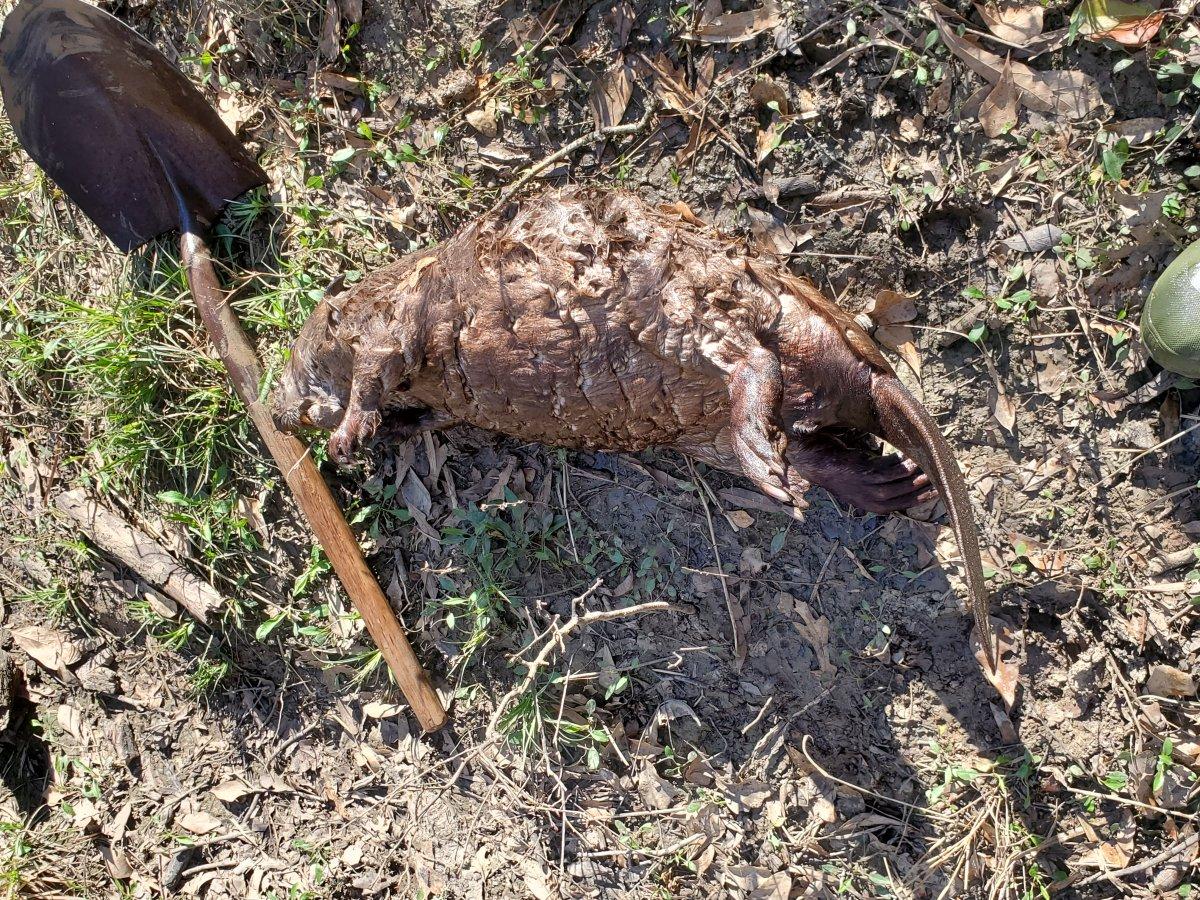 Always a good day when a plan comes together.

I reset and packed bucky to the truck.

The next morning I came to check the traps. BLAAAAAAAAM! Beaver #2. This one was a stud. 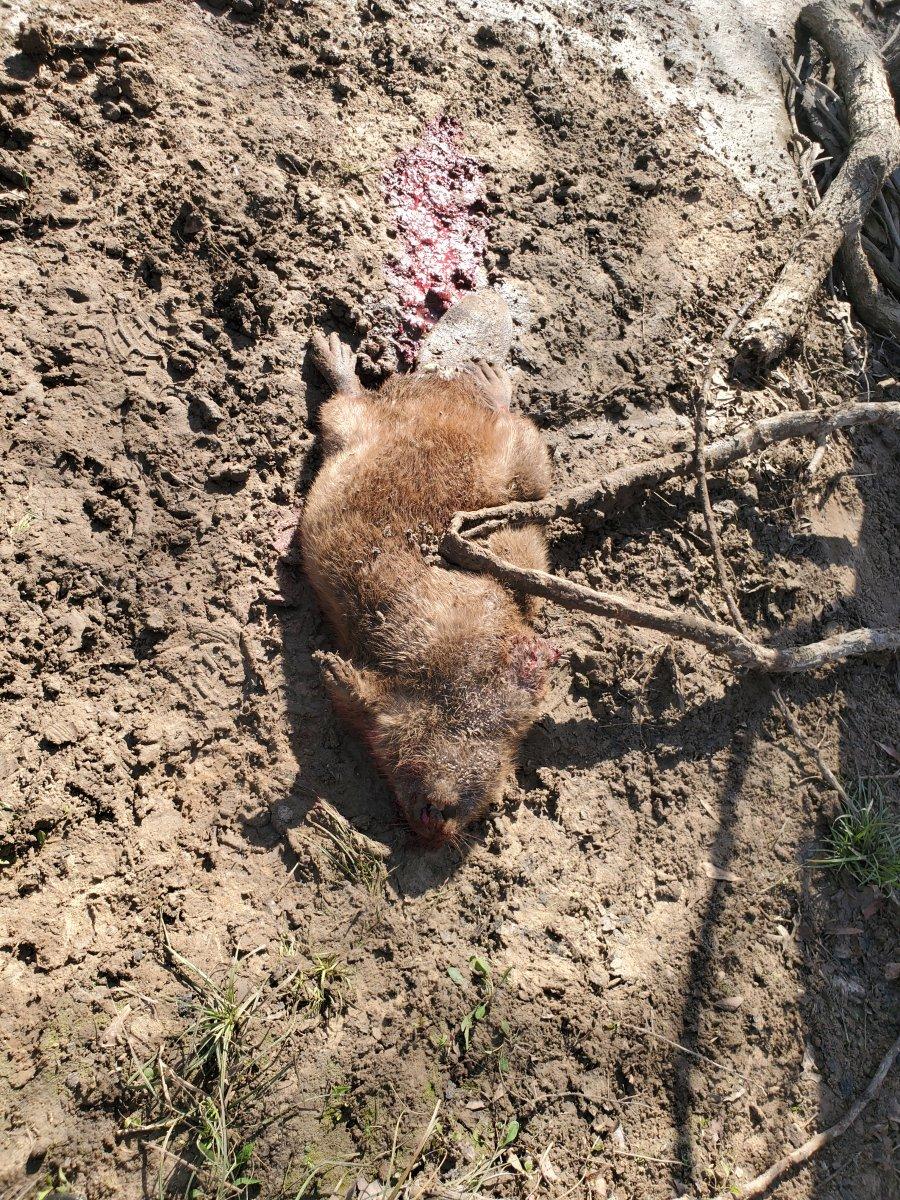 Well it's sure been a great winter but I'm ready for some spring turkey. Good luck folks.

Tri... bout ready to go sire crazy, can't wait til turkey season. Killed a few turkeys in Tejas in the past , need to do again.

If there is nothing in Heaven to test my mettle. then send me to Hell so I can hunt the Devil 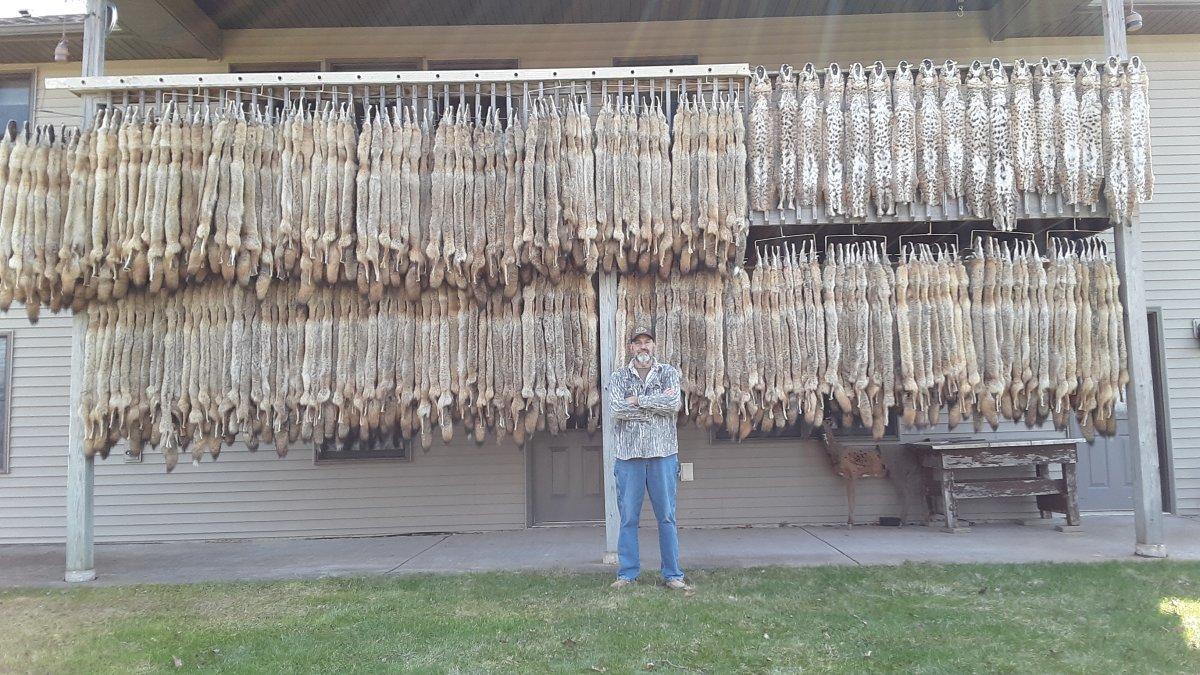 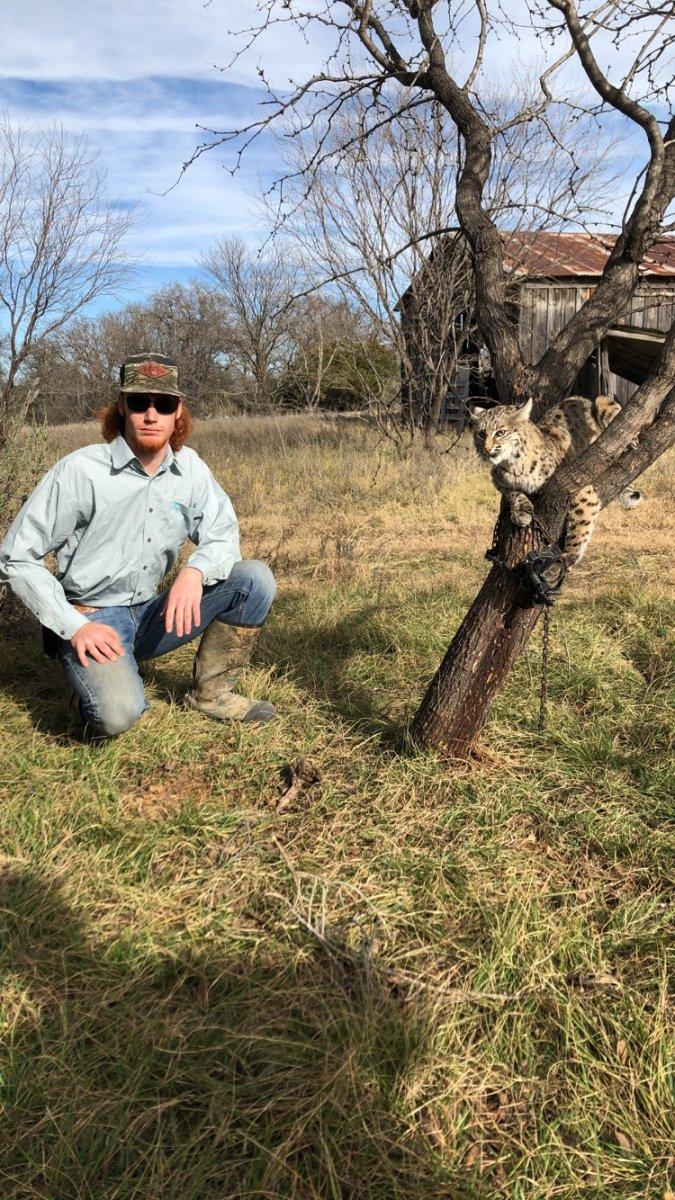 Pretty spotted cat, congrats Its all good ,dont matter how much you get out 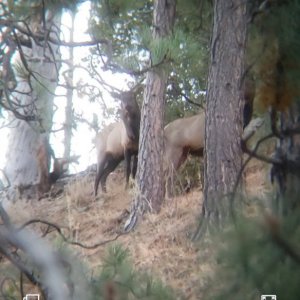 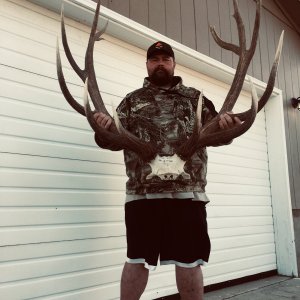 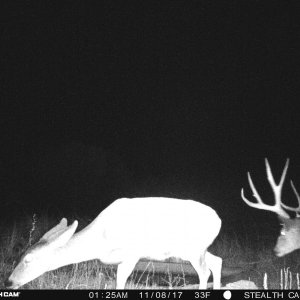 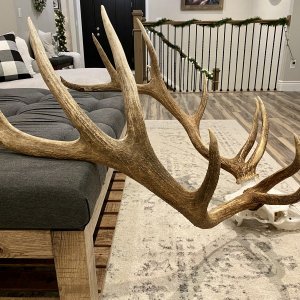 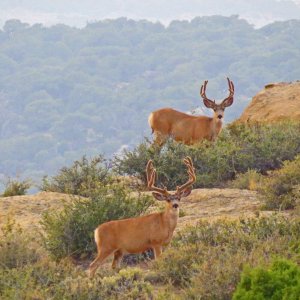 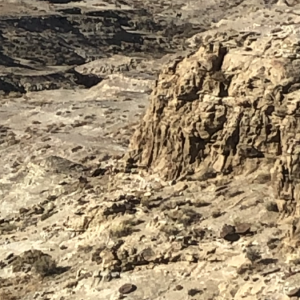 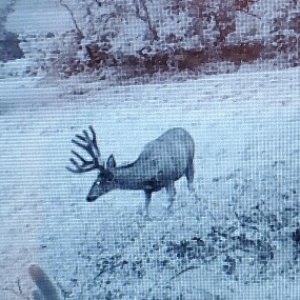 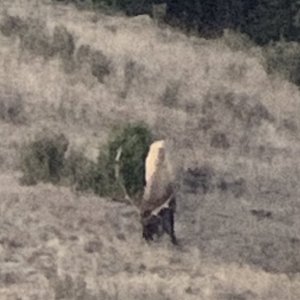 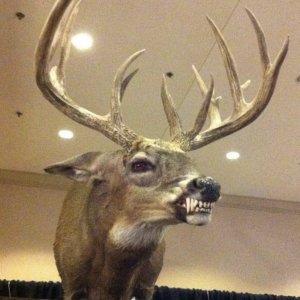 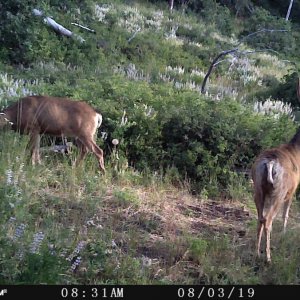 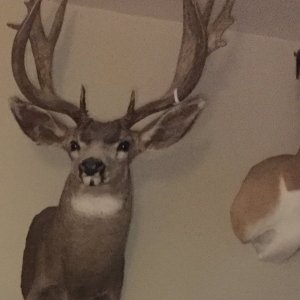 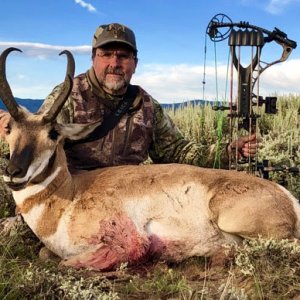