BOOK CLIFF TAG on a Budget

After 11 years I switched up my area from the San Juan to the Book Cliffs and to my surprise and my wife's we had $350 extra dollars pulled from our bank account she discovered that before I did.

My wife transferred some money from checking to savings and left around $400 in the checking account for groceries and the weekend. While she was at the store ready to check out, she discovered she didn't have enough funds. Confused as to why she came home and discovered $350 from DWR had been deducted. You can image her frustration and confusion not knowing what it was for.

She called me looking for answers as she had to go back to the house and get some cash and return to the store to finish buying the groceries.

So, my Parade was rained out before they even built the float!

IRONY of this Year; I finally drew out, but am less prepared than ever before. Financially and gear wise.

How do you hunt when you can't afford to.

I have two options and I will have to weight them out to see what happens
1) Shoestring budget and make it happen
2) Turn the tag back in and hope for a better $ Year.

I understand that at the end of the day there are other responsibilities that come before hunting. The word "Selfish" has been address on this glorious day of celebration....ah, scratch that I mean the curse of a CC charge.

I'm almost too upset to even type and think about it

I would have to say that I am stuck in the middle, it took you 11 years to draw the tag in the first place and who knows what the future for hunting in Utah looks like, so on that hand I say go for it.
On the other hand you have to account for everything else besides just the gear.
1- Gas for scouting- Depending on where you live and what you drive around, $300-400
2- Time off of work, only you can answer how much money you will lose.
3- Taxidermy because you have to do at least a shoulder mount around $1000.
4- Food for scouting and hunt, $150

So with just the basics you have a total of around $1500 give or take a little and this doesnt even account for any new gear you might need. Hope this helps.
M

Flying J Outfitters is a new relationship I made last year selling horsebacIk rides for the owner George McQuiston. I asked him in the summer if he needed help guiding and the rest is history.

George said I would at least learn some new country as he hunted in four different areas as allowed by the Forest Service Permits he is granted.

For me I grew up with horses in 4-H, Did AQHA shows, and local rodeos and roundups in Colorado. After selling what I thought was one cool horse, I never saddled up again for nearly 20 years.

My luck and passion was about to take one step closer to my youth and core of who i grew up as... A horseman.

Work was slow and George was paying to be in the mountains for nearly 3 months. I was asked to go out for 7 days at a time. I jumped at the chance and never looked back with any regrets of guiding rather than hunting. For me, it worked financially much to my financial reward. I was getting paid to hunt.

My first opportunity was to help him take some archery guys into the Book Cliffs Roadless Area. He was going to pack them in early with a Drop Camp and return the same day. Asked if I would come so he could show me some area. 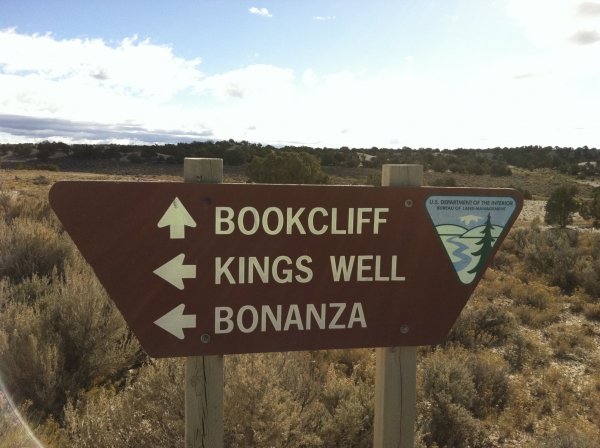 I was a bit apprehensive when we arrived he asked if I wouldn't mind walking in and meeting at a trail head in the middle of the area. As we parked the trucks and I looked over the horizon, All I could see is endless plataeau's and canyons littered with Rocky "Book" Cliffs. It was a bit intimidating. I was very studious with my map and GPS as to not get lost on my first day in. By the Way... hiking when we just brought up 6 horses?

I was getting the raw end of this deal, but I quickly sucked it up and throught, I never ride a horse anyway, why today? I can wait, Start walking Gary. 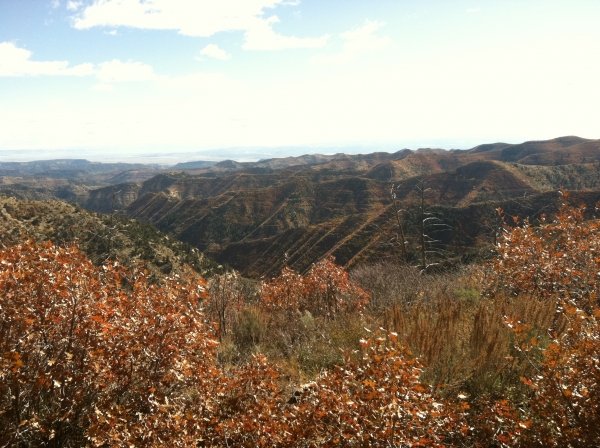 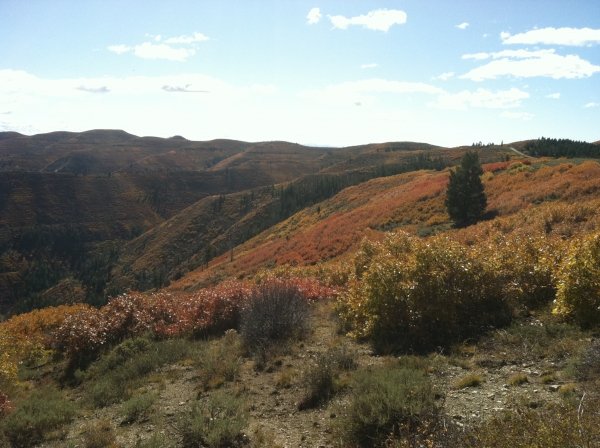 Start on the top and drop down into the lower country. 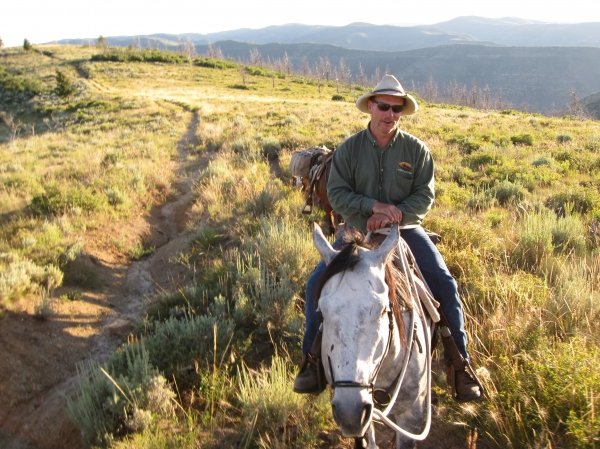 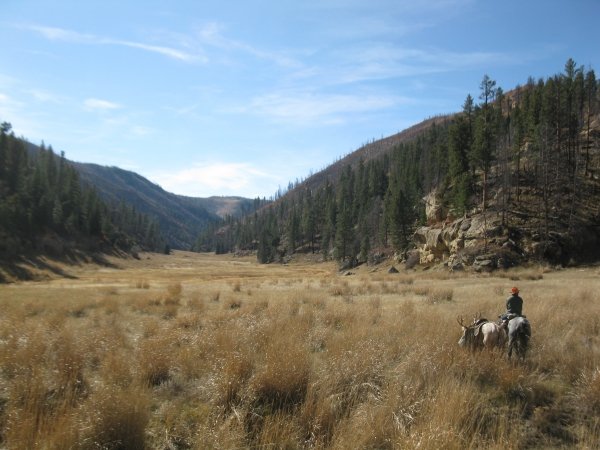 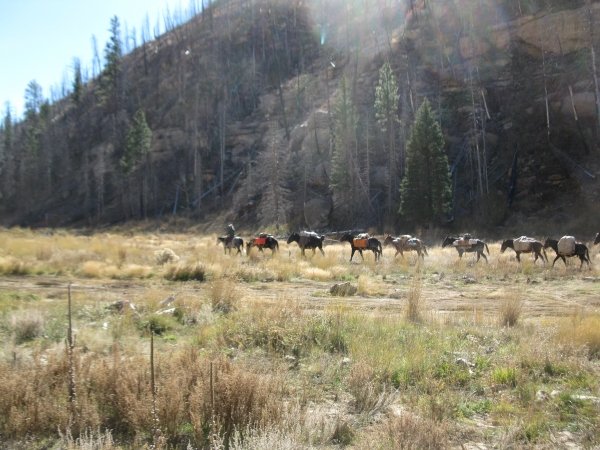 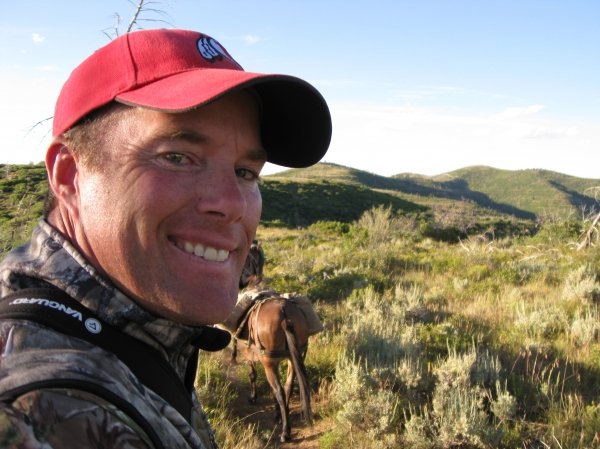 Riding out was so easy going up hill. His horses are studs. After spending several months in the High Unitas, these horse were very condition.
M

The Book Cliff Roadless is incredible scenery. I loved the multiple cliff band that dropped into the flat creek bottom. It was a cathedral type setting. Once done inside the area, your constantly scanning the steep hide side for game. Mule deer and elk are very plentiful.

On this first trip in it was mid august and I didn't see any elk.
George assured me not to worry. Things will change. It sure did for their first archery elk hunter. Here is a photo borrowed from George 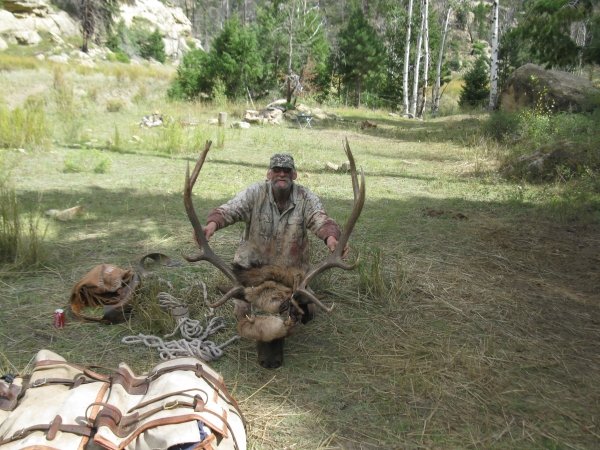 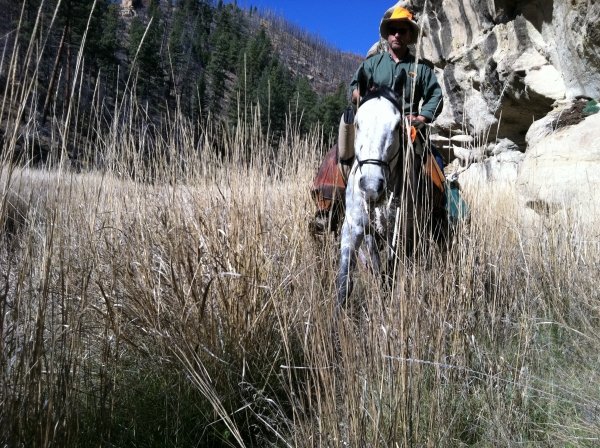 We dropped off some equipment for a Outfitted Drop Camp (Means that we get the hunter into the camp, and provide wall tent, cot, sleeping pad, stove, cooking pots & utensils Water jugs, table, chairs and wood stove for the wall tent.) 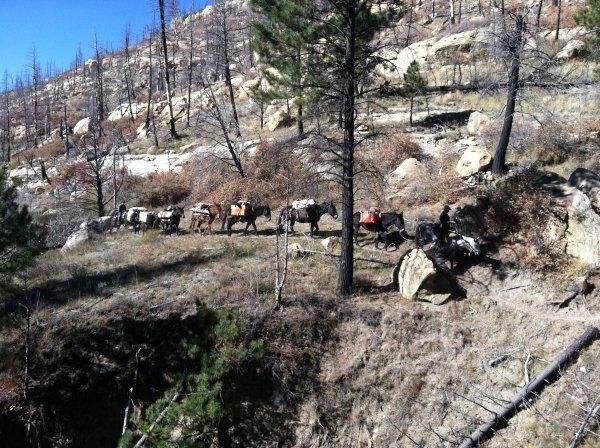 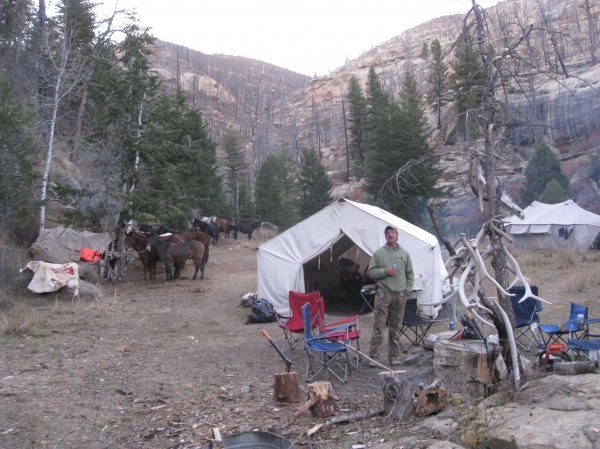 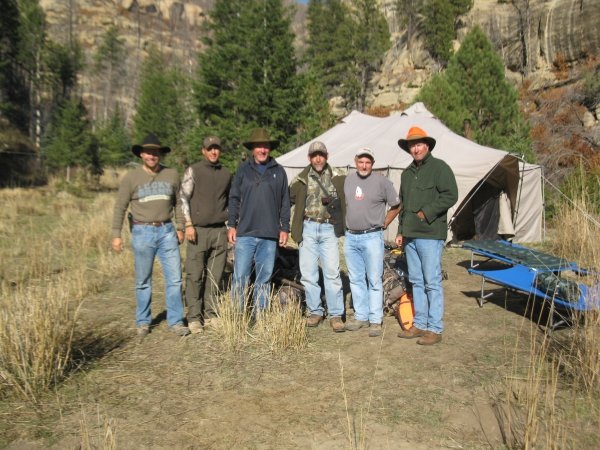 Here are the Cali Boys that have been booking hunts with George for 10 years. 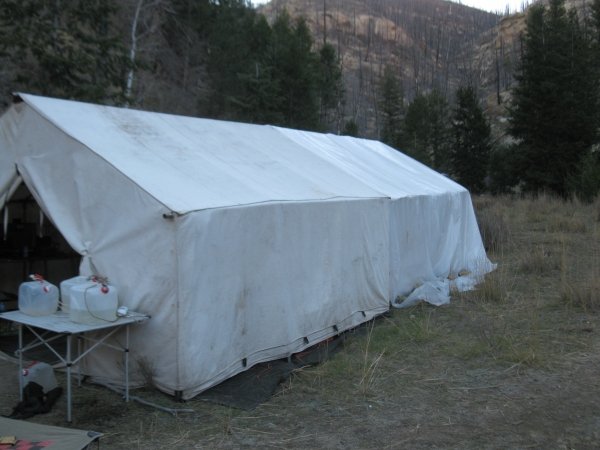 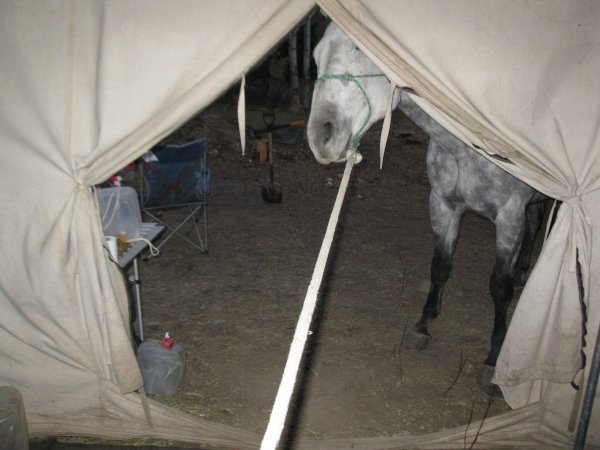 Sometimes even the horses are invited in. 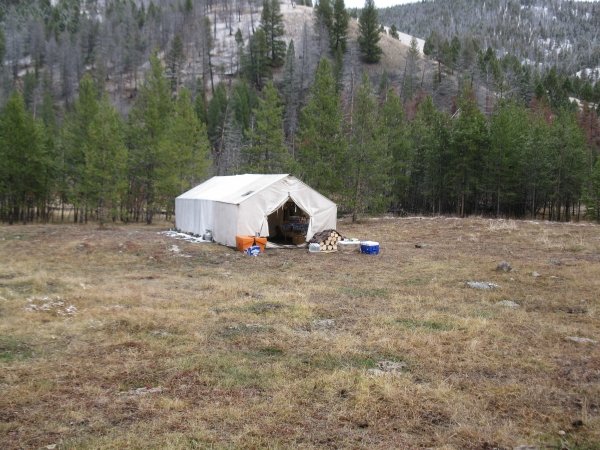 Another Drop Camp for bear hunting in Idaho 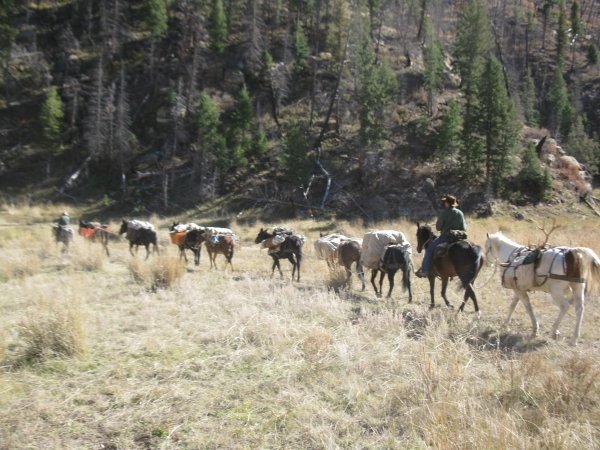 As you may or may not understand. All the items you see at Drop Camp is hauled in by a pack string. When a hunter comes in for his inital trip, he doesn't know that the outfitter has made at least two to three other trips for all the gear just to outfit this week. 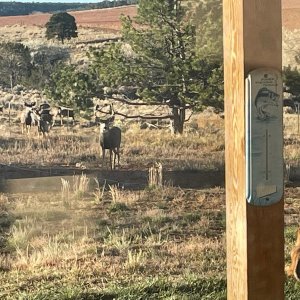 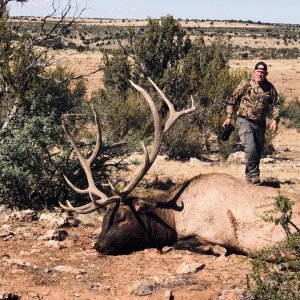 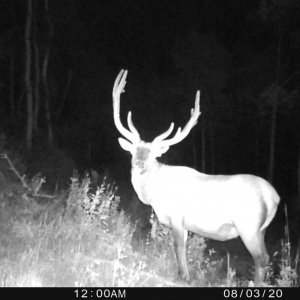 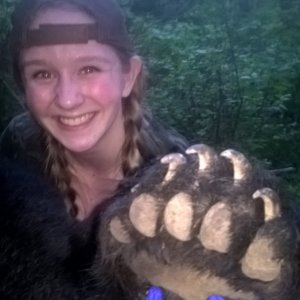 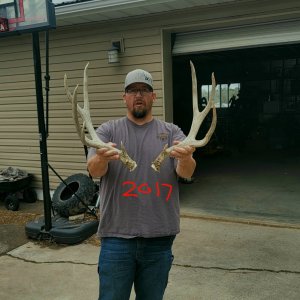 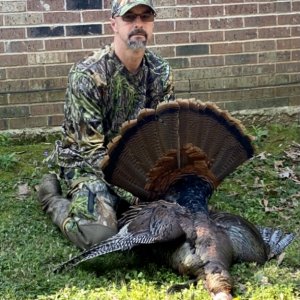 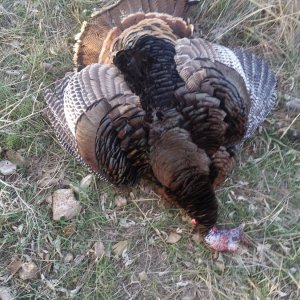 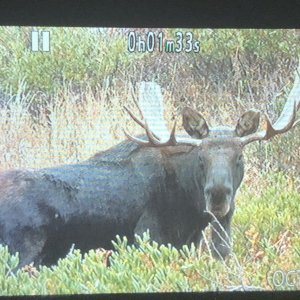 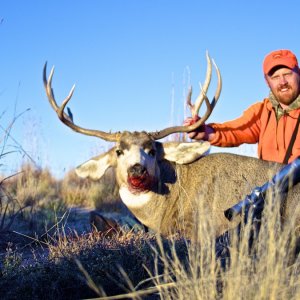 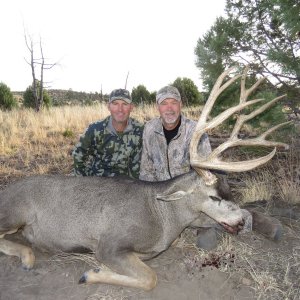 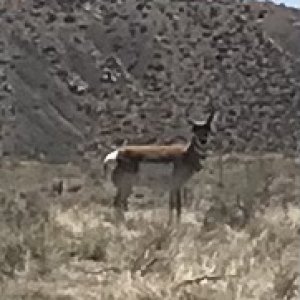 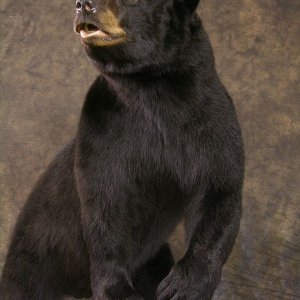